After my initial post on The Bloody Borders Project, a4g and other commenters suggested that I develop maps to illustrate the density of Muslim population as well as the terrorist attacks.

Since then I’ve been working on the Umma Maps, based on Muslim population data supplied by answers.com. The results are represented in the series of maps shown below.

All Islamic terror attacks since September 11, 2001 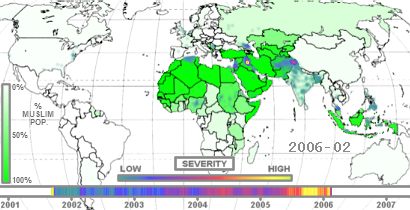 The nature of the “bloody border” is astonishingly clear in this map. With the exceptions of Iraq and Afghanistan, the highest concentrations of terrorist attacks occur along the edges of the Umma, where it meets the areas of lower (but significant) Muslim population.

And now compare this map: 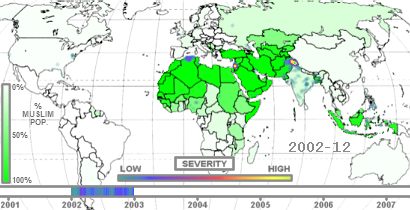 With this map:
Islamic terror attacks in 2005 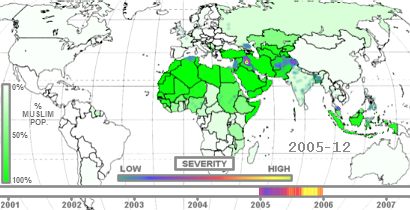 You can see that the Coalition interventions in Iraq and Afghanistan have, from a systemic point of view, caused the border of the Umma to involute, to form fractal boundaries extending into what had been the heart of Islam.

It’s not just the American troops that bring this about — the arrival of new ideas and new political systems brings its own instability and generates the “bloody border” response. The political and social concepts introduced by the Coalition into the Umma are an extreme violation of fundamentalist Islamic tenets. Thus the hardcore zealots of the Umma are drawn in to oppose the introduction of what they see as dangerous and deadly memes.

Once again, the exceptions are interesting. China, Burma, Turkey, and the former Soviet republics in Central Asia seem to be exempt from the “bloody borders” principle.

The relative calm and Burma, China and the “Stans” may have one or more of these causes:

1. Repressive dictatorial governments that maintain a monopoly on violence, or

2. Official control of information flow so that news of attacks is lacking.

Turkey is a different matter. Has its military helped to keep a lid on Islamism? Has it exported its worst troublemakers to the Muslim ghettos of Eurabia? Commenters are invited to weigh in on this topic.

In fact, the relative calm in the center of the Umma may result more from the repressive nature of the governments of Islamic countries than in a peaceful utopian political culture based on the Shari’ah. The events in Iraq suggest that the different sects and subgroups of Islam would, if given the chance, have at each other until the last throat was cut.

In any case, Samuel Huntington was not making it up: there is a border and it is bloody. The border has lately become a fractal, and the unfolding events of the next few years should prove interesting indeed.

See the complete range of maps and information, including a new (smaller) animation, at The Bloody Borders Project.

A full table of information on Muslim populations is listed below.

Note: I am well aware that the differential regional breakdown of Muslim populations within countries, especially India, Russia, and China, is significant. I have in hand a database of Muslim population statistics within Indian states, but have not had time to utilize it yet in order to make a map.

If anybody can point me to reliable and complete data (i.e., every administrative district in the country must have a separate statistic) for other countries, please put the URL in the comments or send me an email, and I will collect data to use in future updates.

17 thoughts on “The Umma’s Involuted Border”