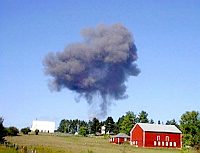 On Monday night I watched the made-for-TV movie Flight 93 on A&E. For those of you who missed it, I recommend picking up the DVD when it comes out. It was very well-done, a low-key treatment based as far as possible on available documents and testimony. Avoiding the two extremes of Hollywood flash and jerky-frame TV “re-enactment”, it portrayed the heroic response of ordinary people suddenly confronted with unimaginable evil.

We watched the passengers gradually come to the realization that they were going to die, and that their only choice was to stop the thugs in the cockpit from attaining their goal. We saw the hijackers arguing with each other in Arabic, with the subtitles informing us that they believed they were carrying out Allah’s will. We saw Todd Beamer say the Lord’s Prayer (the Lord’s Prayer! Right there on TV!) with the operator over the phone, and then we heard, “Let’s roll!”

What was all that religious stuff doing in there? This is the 21st century, and religion is something that intelligent and well-informed people have left behind, along with other forms of superstition and irrationality.

But with Flight 93 we were confronted by twin irrefutable facts: the men of Al Qaeda believed that Allah called them to do what they did, and the passengers who fought back believed that their response was right in the eyes of God.

Yesterday I read an essay in the Jerusalem Post by rabbi Berel Wein (hat tip: reader OS). Rabbi Wein contends that the pious secularism of the Zionists has made coping with the likes of Hamas that much more difficult:

We are accustomed to think of the secular-religious divide that exists in Israel today as relating to denominational pluralism, conversions, civil marriage, Sabbath observance and other matters of ritual and budget allocations. All of this may be true, but it ignores the basic divide, which is one of values, world view and perception of ourselves and others.

The recent success of Hamas in the elections for the Palestinian parliament should serve to focus the attention of our leaders and public on a hard fact that Israel has always chosen to ignore until now: that the Arab-Israeli struggle is at its core a religious dispute. Only by appreciating and understanding this unpleasant but very real truth does the struggle take on a somewhat rational and understandable, and perhaps even predictable, pattern.

What is true in Gaza and the West Bank is true wherever Islam confronts the infidel along its bloody borders. Our enemies are fighting a religious war, and arguing with them that we do not believe in our religions any more is not going to help. Our renunciation of our own beliefs is simply more evidence of our corruption and inferiority.

The Arabs view us as the latter-day reincarnation of the Crusaders of the Middle Ages. The struggle and triumph over the Crusaders was a victory of Islam over Christianity, pure and simple. It reinforced in the Muslim mind the exclusivity and superiority of Islam over all other faiths. It strengthened the concept of dhimmi in the Muslim world, whereby non-Muslims could exist in their society solely in a subservient, second-class state of being, and even then only at the sufferance of the Muslim rulers themselves.

Religion was the motivating force in that struggle. It remains so in our current struggle.

This is an inconvenient fact that our leaders and our media are reluctant to confront. In fact, there is a virtual taboo against mentioning it in public; the word “Islamofascist” passed George W. Bush’s lips only with great reluctance and after the passage of four years. The elites must maintain the fiction that Islam was “hijacked” by evil opportunists who do not represent it.

But that’s not the way many Muslims view the situation.

America can label Osama bin Laden an arch-terrorist, which again he certainly is; but in the Muslim world he is viewed as a religious leader, an accepted interpreter of the Koran and of Islamic principles. The Muslim world does not speak out strongly against him — not so much out of fear as out of Islamic faith.

And this is why victory for the secular West — even born-again Christian George W. Bush is pretty much secularized and, in any event, certainly an “infidel” — in Iraq or anywhere else in the Arab world is so difficult and problematic.

The Cold War was fought on a secular basis. The current terrorist war is a religious struggle between the true believers and the secular “infidels,” who do not seem to understand their enemy and its true motivation.

So we infidels, bound together in uneasy alliance by the enmity of our common foe, are required to defend ourselves against a religious enemy. Our enemy believes what he believes with a righteous zeal that is almost impossible to comprehend. He commits unspeakable evil in the name of his religion. His belief is strong and pure and sends him willingly to his death.

But what do we believe?

Christians believe in Jesus, Jews believe in Yahweh, and Hindus believe in Krishna. Even the atheists and secularists among us believe in… well, they must believe in something, otherwise they wouldn’t be here with “us”, they’d be over there with “them”, with Cindy Sheehan and George Galloway and the Unabomber, chanting “No blood for oil!” and visualizing industrial collapse.

Even if you’re an atheist, or someone who is uncomfortable with bringing God into the conversation, or don’t think religion has much point in the modern world, you must believe the West has something worth defending, otherwise you wouldn’t be defending it. There must be some core, some value of humane and civilized tolerance, that makes it worth it. Despite the tawdry fleshpot and narcissistic sump that modern culture has become, you believe something important is there.

And the Islamists certainly believe something.

But is our belief stronger than theirs?

Their belief straps on a bomb belt to destroy the believer and everyone around him. Their belief climbed into the cockpit of four passenger jets to carry the believers and thousands of others to a fiery death.

So I repeat my question: Is our belief stronger than theirs?