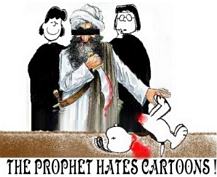 Muslims are sooo angry about the bad press they get that they’re trying the direct approach: entreat the Left with anguished cries of insensitivity and threaten the Right with scimitars. Since the former control the media for the most part, the Muslimist strategy (are we allowed to spell it that way anymore or is it “strategery” until 2008? Just asking…) is devoted to getting their attention. Islam may be bloody, but it ain’t stupid.

Casting about for some help with this moral dilemma — it is moral for those of us who, say, value the right to say what we please as long as it doesn’t hurt the children — Gagdad Bob at One Cosmos has come across a little bit of chicken soup for the Muslim soul. Here are a few sips of his concoction:

I’ve assembled a list of “wise old Islamic sayings”…that I think are particularly relevant to our discussion. These are almost “clichés” in the Muslim world, but they are probably new to you:

Sticks and stones will break your bones if your words should ever humiliate me.

If at first you don’t succeed, try, try, try to blame the Jews.

Fool me once, death to you. Fool me twice? I don’t think so.

Get thee hence and read the rest.

By the way, Shrinkwrapped is correct. If he’s not already there, Gagdad Bob should move to a state with liberal “carry laws.” And if you think his are bad, I suggest that you also peruse the comments.

Thanks to Mike Oxlong of I Spy With My London Eye for the cartoon. A bit late for the Cartoon Contest, but his invite probably went by boat. It’s worth putting up, despite his modest protests to the contrary.