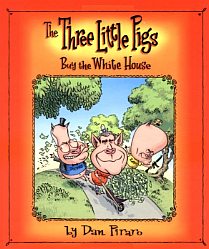 I tell ya, after a hard day down at the Anarcho-Syndicalist Transgendered Workers’ Co-operative fighting the plutocratic globalized corporo-fascist patriarchal power structure, there’s nothing I like better than to plop down on the futon, grab a cold cup of tazo chai, and read a good old-fashioned Bush-bashing book.

If you’re the same kind of guy, you’ll want to go out and get yourself a copy of The Three Little Pigs Buy the White House, by Dan Piraro. Mr. Piraro is familiar to thousands, if not hundreds, of readers via his syndicated comic strip in — gasp! — The Washington Times.

From the Amazon scan of the book’s blurb page:

Follow the adventures of Dickey, Rummy, and Dubya — the three little pigs who went WEE WEE WEE all the way to the White House!

In the fine tradition of scorched earth, take no prisoners political satire, The Three Little Pigs Buy the White House pokes fun at a certain trio of Republican politicians who are living high on the hog.

WATCH OUT: these little pigs have no problems replacing brick with straw when it comes to your nation’s security. And don’t be afraid of the Big Bad Wolf, that is if… uh… we can find him.

The Amazon page shots are marked “copyrighted material”, so I dare not reproduce them here. But the picture of Nixon-the-pig, with the dark purple color, the long piggy snout — you can’t beat that for cutting-edge satire.

This little piggy made millions off of big oil.

In the illustration — wait for it — Dick Cheney lights his cigars with $100 bills! And while sipping a martini, with an olive in it! I mean, am I ROTFLMAO, or what?

That’s it for the Amazon excerpts. But, according to our tipster, Mr. Piraro has an afterword concerning the depiction of the animals in his book. He warns the reader that pigs and wolves do not necessarily have the characteristics that he depicts, and that people should not make sweeping generalizations about the predilections of animals.

This is a hard-hitting, transgressive, speak-truth-to-power sort of book. You know it will sell out pronto, so rush on down to your local B&N, grab yourself a mocha frappuccino, settle into one of the comfy chairs, and read one of the display copies before it gets too dog-eared and fingerprinted to be legible.

Hat tip: ApollonZamp, who said: I thought about buying it for you, but then decided I didn’t want money to go into the pocket of this guy’s homegrown organic hemp jeans. However, I couldn’t steal it easily, either. Our loss.