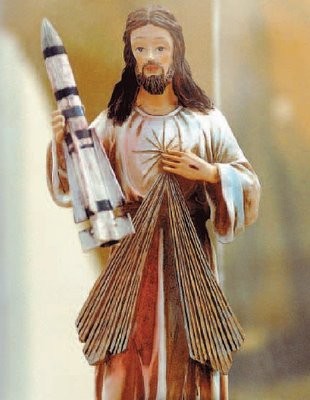 Well, that’s one way to decide on this piece of art. Of course, Barcepundit is less sanguine about it; he knows what the artist is up to when he displays this at a fair in Madrid:

As I’ve said many times before, I’m not a believer, but I know when I see a religious offence and more than that, I know when I see a double standard by people who say that we should respect artistic freedom when one religion is mocked and also say that the Mohammed cartoons are an intolerable offence to people’s religious beliefs.

Unlike Barcepundit, I am a believer. And I agree with him that the point of this piece of “art” is to offend, to be edgily avant-garde.

But it fails on both levels:

mockery of Christian icons has long since jumped the shark. It is sooo 1980 you want to pat the “artist” on the head and wish him better luck next time.

It also fails to offend me. In fact, I wouldn’t mind owning a copy. I wouldn’t actually pay money for it, but I wouldn’t mind having it. I could put it in the tulip bed, under the mimosa and next to the cow skull which has mums growing out of the eye holes — my memento mori. The Jesus-with-Phoenix missile statue would make a nice counterpoint.

One of Barcepundit’s readers emailed him:

“Just saw your story with the picture of Jesus holding a Phoenix missile. I was commissioned into the U.S. Navy through Aviation Officers Candidate School at Naval Air Station Pensacola, Pensacola, Florida (remember the movie “An Officer and a Gentleman”). I remember that the chapel on the Naval Air Station had a statue of the Virgin Mary in it holding an F-4 Phantom in her hands (Our Lady of Loretto is the patron saint of aviators). Context and perspective make all the difference.”

That’s the point, isn’t it? Context and perspective actually provide the meaning of any event, and it is the participant’s provision of meaning that matters. I was in that chapel many times as a child and I’m sure I saw the statue holding a jet. It wouldn’t have made a particular impression: a Catholic school education includes lessons on the concept of the just war.

In a naval chapel, such an icon would make sense: anyone who knows enough jet pilots for any length of time knows jet pilots’ widows. My cousin was one at the ripe old age of twenty three.

Wish I did remember seeing that statue.

9 thoughts on “So This Means God Is On Our Side, Right?”