There may be no worse affliction for a culture than its flaccid deflation in the face of bullies. When nothing is worth dying for, then life has no joy either. When the goal is to avoid getting killed, joy dies.

Celebrations in America are often based on old traditions, imported from Europe. Louisiana has Mardi Gras, and throughout the rest of the country Christian churches which follow the liturgical calendar closely also have a much quieter festival in the form of Shrove Tuesday, with pancake suppers and celebrations to mark the final day of the seasons of Christmas and Epiphany. At midnight, Ash Wednesday begins the penitential season that will lead to Easter.

Europe threw out the meaning behind the celebrations, but hey, that’s no reason to throw out the party, right? Especially the festivals which allow cultural transgressions with a certain impunity for making fun of important figures. For millennia, these carnivals have served as a vent for mayhem, making the rest of the year, with its daily, dull routines, more endurable.

At Brussels Journal there are two essays on the death and the dearth of Festival in Eurabia. In the first, “Dispatch from the Eurabian Front: The End of Carnival,” Belien describes the sad fear that infects the prospects of future festivals. Last year, after the carnival, those who are most compelled to obliterate joy — the “frothing fundos” as eteraz calls them — complained that the festival had made fun of Muslims:

After last year’s parade the organizers received a protest letter from the Arab League, stating that the event had been “insulting and offensive to Muslims and their culture.”

Well, yes. That was the point. They also make fun of the Pope and the King and any group deemed worthy of having a little air taken out of its tires.

Have you noticed that a “clash of cultures” really translates into a “rash of Muslims”? Europeans gather in crowds to celebrate; Muslims gather in crowds to complain, bully, or burn things down. I guess it comes down to this: whether your culture is rooted in Eros or Thanatos. You may guess which side is which here.

The real issue is freedom to celebrate who you are and what your history has been. It is a freedom that is disappearing in Eurabia, because above all, Islam obliterates other cultures’ histories:

…the most famous carnival celebration in Belgium is the one of the Flemish town of Aalst, 35 kms to the west of Brussels. Several groups parade through town in a pageant with floats, bands, and jesters, making fun of recent national and international events. The tradition goes back centuries, to mediaeval times. With carnival [mardi gras, as they say in Louisiana] approaching (28 February), the authorities are afraid that some groups might use the Danish cartoon crisis to dress up – God, or rather Allah, forbid – as the prophet Muhammad.

The carnival in Aalst is known for its disrespect of just about anything. This has never caused trouble in the past, though Aalst’s most popular group is a raucous, vulgar bunch of men dressed up as women, and calling themselves the “voil jeanetten” (“dirty faggots”). Mind you, the bawdiness and vulgarity is restricted to carnival, and these people are respectable, civilized, straight citizens throughout the rest of the year. Everyone, the participants and the public, know that the indecent and disrespectful behaviour is all in jest and until now nobody has ever taken offense.

Until now. Until the Muslims came and pooped on the party. The thin-skinned, the arrogant, the spoilers. Sometimes you wonder: does this inability to laugh at oneself go all the way back to Mohammed’s characterological deficits? Surely he was not known for his ability to jest about himself.

The parade and festival organizers haven’t given up hope yet. They’re meeting with town officials, trying to figure out how to have their ancient festivities without getting killed by The Grim Ones.

“Prohibit[ing] certain things might have the opposite effect,” Nicole Ringoir, the president of the organizing committee, told a Flemish newspaper. “Perhaps we should trust that the carnival revellers know how far they can go.” In other words: count on the fact that even dirty faggots fear for their lives.

That’s true. A bomb or two ought to settle things down.

Meanwhile, officials are caught between a rock and a hard place:

“We cannot censor the parade. During carnival the inhabitants of Aalst mock everything and everyone, including the Pope and the King,” Anny De Maght, the mayor of Aalst says. “I trust that our groups will know what limits to respect.”

One thing is certain: in the coming age of Eurabia the mediaeval tradition of carnival will be abolished. I guess that is the price Europe will have to pay for “progress.”

Well, it is the price to be paid for dhimmitude. But maybe that’s how Eurabia will have to define “progress” from now on. The light of joy will get dimmer and dimmer until it finally flickers out. 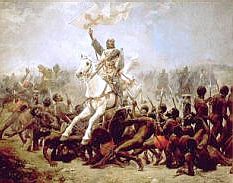 As it is flickering now, even in Spain:

In 711 Muslim armies crossed the Strait of Gibraltar. They took Spain by force and remained there until they were thrown out during the reconquista in 1492. Every year, in a tradition that goes back to the 16th century, Spanish villages still celebrate the liberation from the Moors —emphasis added — (as the Muslims were locally called) during “Moros y Cristianos” festivals in which effigies of the prophet Muhammad – the so-called “la Mahoma” – are mocked, thrown out of windows, and burned.

Now the Spanish, having witnessed what happened to the Vikings recently, are wondering whether they can still continue their tradition of “offending Muslims.” The village of Bocairent near Valencia decided this year to discontinue the century old tradition of mocking and burning effigies of Muhammad. Bocairent does not want to risk becoming the target of suicide bombers.

Eurabia: death by a thousand cuts.

It is enough to make you weep, watching the light in the eyes of Europe dhimmi down and weasel out. It is a dark time in a darkling continent.

10 thoughts on “Eurabia Buries Her History and Traditions”