It’s heerrrrre…Pajamas Media has morphed into OSM: Open Source Media. Even as I write, they are gathered in New York City, making plans for a world take-over new venture, one which will change the baby face of blogging into something more mature, let’s say an adolescent with an occasional need to shave. But OSM will grow and mature, and it’s great fun to be in on the ground floor even if we couldn’t get to the wedding.

Unable to attend, we nonetheless offer our hearty endorsement of Pajamas Media OSM (this is going to be hard to change. Kind of like when the new bride takes on her husband’s name. She may be Leticia Lesueur now, but to those who knew her when she was running around in rompers, she’s still little Tittie McFadden. So we practice saying her new name and try to look serious about it).

Meanwhile, the founders, Roger Simon and Charles Johnson — with input from many others — have announced our mission statement:

Sounds exciting to me. It means we still get to bicker and exchange ideas only the medium will be a bit more coherent and easier to access. Another temporary battle won in the war on entropy.

In case you had any doubt at all, we are not the decorated experts mentioned above. Nor are we — Deo gratias, as the Irish used to say before they all became Euro atheists — academics. We are the ones sitting around in our pajamas, underwear, and nightgowns (or out here in the country, our birthday suits because who’ll ever know?). We have nothing to offer you but our opinions, but we have at least one of those on any topic within the purview of Gates of Vienna.*

And while I am vaguely feeling left out and envious of the celebratory doings in New York City, my karma (in the form of a leg injury in September) is keeping me glued to the chair in Virginia. Meanwhile, to get the flavor of the thing, here’s a small version of Charles Johnson’s view from the Rainbow Room. The real picture is on Little Green Footballs. 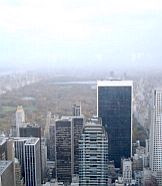 The last time I was in the Rainbow Room I went dancing in a plum colored dress from Saks Fifth Avenue and had Grand Marnier soufflé. But that was long before the blogosphere was born, back when the ethernet was just beginning to spread its ganglia into the universe. We talked about Teilhard de Chardin and I danced with an older and stately man who had worked in the French Underground in World War II and taught ballroom dancing to Nazi officers. He was an excellent dancing teacher too: the first man who could show me how not to lead. As the Baron can tell you, that’s no mean feat.

Another world. Another time. And yet de Chardin’s ideas (despite his other sins) about a “world wide web” have come to be.

* All the other, overflowing and off-topic opinions are here, in The Neighborhood of God. Everything from appellations to zucchini.

9 thoughts on “The Rainbow Room”