There’s a new car coming, folks. Not a hybrid, either. And there are further ironies to this story, too, proving once again — as Sarah learned all those thousands of years ago — God laughs last.

You see, the company developing the technology for this new form of energy production is located in the nowhere place called the Zionist entity (it doesn’t exist on some maps, but no doubt the venture capitalists have already found their way. Kind of like the Three Wise Men, only these guys are following the money).

This Israeli company is called Engineuity, proving that even engineers can be cute. Their car will use a method to produce hydrogen while the engine is running, rather than trying (and failing) to somehow store hydrogen to create energy: 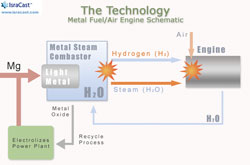 The company says that their engine will not involve much in the way of design change. They hope to be ready to roll in about three years, providing the investors show up to fund the production of a prototype.

I sure hope this isn’t a “cold fusion” story. It has all the elements of miracle, irony, and a way out of the petrochemical fight with China that’s only a few years down the road.

The whole story is here, with links. Maybe the engineers will weigh in with their opinions; the best I can contribute to the conversation is keeping my fingers crossed.