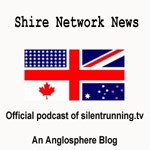 All right, everyone, we need your assistance. We did something yesterday and we don’t understand what it is. Or rather, we partly understand it, but not entirely. It woud be most helpful if some of our more technically inclined commenters could drop by and tell us more about it.

We were interviewed yesterday morning by Tom Paine of Silent Running for a podcast. Now, being old fogeys, we we don’t really know what a “podcast” is, and we’re not likely to learn anytime soon, because it includes a 3MB mp3 file, and we have a 28kb dialup here in Backofthebeyondville.

But, whatever it is, it involved having a pleasant telephone conversation with someone from the Southern Anglo-Hemisphere, at a time which was the middle of the night for him. A most interesting fellow, this Aussie. Actually, he lives in Australia, but he’s a Kiwi — that is, he’s from New Zealand, which stands in relationship to Australia roughly as Canada does to the USA. You know — tree-huggers and peace activists vs. beer-drinkers and gun nuts.

Tom is very much part of the Anglosphere, and well-informed about events here, as well as in Canada and India. You could call his prognosis for our continued existence “guarded.” Like the rest of us, he finds the Islamofascist threat one to be reckoned with.

And I do mean “reckoned with,” which does not mean “talked to firmly.” Come to think of it, “negotiations” aren’t a part of reckoning either. Think of it as you might think of “ a day of reckoning.”

According to Tom, the Australian blogosphere is a foulmouthed and anarchic sort of place — the motto of Silent Running is “If you are offended by strong right wing views and bad language, you should probably…” Whoops. I can’t put the rest of it here; this is a family website.

But go on over to Silent Running and see for yourself. While you’re there, you can listen to us cast a pod.