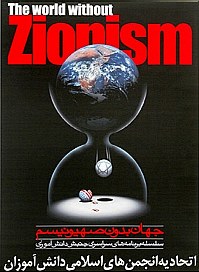 Dr. Zin at Regime Change Iran has a request to make of the blogosphere. He wants us to get the word out about what “The World Without Zionism” envisions in its entirety.

It’s not just the destruction of Israel. Iran’s President Ahmadinejad is quite explicit that the United States in particular and the Anglosphere in general are very much in the crosshairs of the Great Islamic Jihad as orchestrated from Teheran. Just look at the complete graphic the mullahs produced for the week of jihadist zeal: both Israel and America are falling to the bottom of the hourglass.

Given the predilection of the craven appeasers now dominant in the media, academia, and the upper levels of the diplomatic corps, it’s understandable that Mr. Abbassi might come to this conclusion.

Those of us who form the backbone of the Anglosphere know that he is wrong, tragically wrong, but there is no way to communicate that to him. Our only hope of avoiding massive carnage is regime change in Iran.

So we’ll let Dr. Zin have the last word:

9 thoughts on “It’s Not Just Zionism”