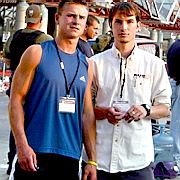 So. There were these three college students. Stop me if you’ve heard this one already…

There were these three fun-loving college boys looking for a good time weekend. Funny thing is, they found it — and more than they had any inkling of when they set out to go get them some fun in the sun on the Gulf.

Fourteen hours from Duke University to what was formerly the Big Easy and is now the Enormously Difficult. Fourteen hours to decide what to do when they got there and how they would be of help. It turned out to be both more and less than they expected.

First of all was the logistics: the fallen trees and flooded roads. They were able to make their way to LSU where a makeshift medical facility had been set up. They began helping with the evacuees but with the number of volunteers coming in, they realized they were superfluous.

They don’t say how they ended up at their next stop: a TV station, where they used those strong young bodies to load water into trucks (it hurts my back to think about it) and taking in supplies as they arrived. Good work for guys with no medical or rescue skills.

Now here is where the old Yankee (and Southern) “can-do” genetics in the American character take over. They’re at a TV station, right? And what are TV “journalists”? Why, they’re members of the Press. So the boys did what all college boys do: they improvised on the theme of their weekend of fun. They stole a press pass, xeroxed it for all three, added their own names, and set off to do some real rescue. Are you excited yet? Are you there with them in the car, yelling “Hoohah” and full of energy just sparking to do something?

And the city was theirs. Sort of.

The first thing they saw was a kid standing on a street corner with a sign bearing the legend: “Need Food and Water.” After a moment’s hesitation, they took him on — and presumably fed and watered him — and in exchange the boy, Mario, served as their guide. The group made it to the convention center.

They don’t say what they did at the convention center, only that they were distressed that three college sophomores with energy and a few feints, had managed to get to the scene and yet no one else was there helping.

Here is the answer, young men. You were three students with some brains and initiative and you had no one to answer to. You didn’t ask permission — thank God for that — you just rolled up your sleeves and did what you could. No mayor or governor was blocking the way — at least they weren’t blocking the way for the Press, just for the relief and rescue people. So under the guise of observers, you were given access. Just like the UN. You could’ve put on some blue helmets and felt right at home.

This mess was way bigger than anything three college boys could handle, so they cut it down into manageable chunks. First they rounded up a bunch of evacuees, including three women who left their husbands behind. See, the rules still work: women and children first. Later , the boys returned for the women’s’ husbands. Everyone was re-united and put on a bus headed for Texas, including a man they’d found who had survived the rising waters by climbing a tree and spending the night being eaten by fire ants. It doesn’t say if Mario was among that number, but he probably was. And he’ll probably remember those three college sophomores for the rest of his days.

Washington has risen to the occasion by forming a committee to investigate What-Went-Wrong. Those politicos won’t see the rest of the country rolling its eyes at the thought of another incompetent 9/11-like “commission” to scuttle the truth.

Here’s the truth of it:

We owe our gratitude to the boys from Duke. As one of the women said:

Not wise men. Sheep dogs in training who just earned their certificates.

Makes you feel good about the next generation.

4 thoughts on “Sheepdogs or Angels?”