The blogosphere is reverberating with the drums echoing from Bill Whittle’s fine essay about the divisions of people into tribes. What follows is not exactly a summary; it’s closer to a synthesis of his ideas written for those of us with the attention span of your average Cub Scout. That being said (“that” meaning you should go read the real thing here), let’s look at Mr. Whittle’s fine images, beginning with the Pink People.

Whittle’s PP’s are typified by Hollywood types, though Pink is not confined just to Hollywood — it’s simply that there are more Pink People per square inch in Hollywood and its environs than there are anywhere else, except perhaps in Washington, D.C., a place for which Pink People also have an affinity…

When you Think Pink, consider Sean Penn in his rescue boat — a four person “rescue” boat which Mr. Penn fills with four people, one of whom is his personal photographer. A boat in which the plug had not been fastened so that there are many hilarious ( or hideous, depending on your sensibilities) pictures of Mr. Penn bailing the boat with a red plastic cup. Mr. Penn, Pink Person extraordinaire, was not out to rescue anyone. This was merely his trip to Iran translated to American. He was in New Orleans to appear to be rescuing someone. No doubt he left money there also, to show he was acting in good faith (since he does not act particularly well, acting in good faith may be all he has left in his small bag of tricks). Mr. Penn may even have left some of his good-faith money with the mayor, who is definitely a Pink Person — a Pink Person appearing as a mayor. This pink-to-pink transfer allows all the Pinks to feel good, and to a Pink, feeling good is the summum bonum.

Pink people wear rose-colored glasses. They prepare for the future by grabbing as much material wealth as possible and then looking down on others, whose actions in life may originate from different motivations. Pink people do well until they are called upon to act decisively for others in situations where they themselves may be at risk. This situation does not cause a change in color. They simply scream in place until a grey person eats them or rescues them.

The grey people? Here is where I synthesize Mr. Whittle’s comments. He describes this grey as the color of concrete. Where Pink People are soft, Grey People are hard, like the graphite in mechanical pencils. They are that way on purpose because they act purposefully, wherever they are.

Some of the Grey Guys are Good Guys and some aren’t. The first group of GG’s are the wolves, either those who are loners or those who run in packs. Some of the Grey Guys appear to be Good until push comes to shove and then they turn their coats and what you thought was a sheepdog, herding the rest of us, becomes a wolf, eating the rest of us. The sad misfortune of the Sheepdogs-turned-wolves in New Orleans — the police officers ‘captured’ on videotape breaking open display cases and looting stores — is that they cannot turn their coats back again. Once exposed, the wolf skin sticks tighter than mendacity does to Michael Moore. None of them may go home again because they helped demolish the place where they live and move and have their being. As the farmer says, not even an animal defecates where it eats. But those people did, ergo, they slipped below the level of animal to some sub-routine in the reptilian brain we all possess.

The Grey Guys who are sheepdogs are the ones we depend on when conditions get dicey. I don’t want one of the Pink People in charge. I don’t want to have to abide by the edicts — or lack of them — emanating (or not emanating) from the likes of Pink People such as the governor of Louisiana. With leadership like that, I am likely to drown, sometimes with another person’s foot on my head. With leadership like that, the Good Grey Guys, the sheepdogs, have to revert to their own good sense. They have to take the law into their own hands because the law is three feet under the swirling waters and the sludge and the Pinkies are crying about how awful everything is. One of the favorite rejoinders of the Pink People in tough times? “No fair!” You can see many examples of this behavior in the Exodus of the Jews from Egypt. Moses was a sheepdog but he was forced to lead the sheep despite themselves.

A good example of a sheepdog, a Good Grey Guy, is Haley Barbour, governor of Mississippi. If there is a more snake-bitten state than ol’ Miss, I’m hard put to know what it is. There is one teaching hospital in the whole state. “Dirt poor” must have been coined so that it could ride in front of Mississippi. Currently, the state’s median income is twenty-five per cent lower than the national average. But the dirt and the poor presented many opportunities for the Good Grey Guys to come loping in to do the dirty work of clean-up. And they did, led by their governor and by the local officials and municipal police who worked to rescue people and restore order. Was it perfect? No. But Mississippi shone where Louisiana went dark. Mississippi’s African American folks are no better off than Louisiana’s; they just have a larger mass of Good Grey Guys, of both races.

Wolves prey on those in duress; Good Grey Guys prey on the wolves. These two are cut from the same cloth, really: tough, strategy-minded, ready for a fight. It’s the motivation that drives them which makes the difference. The Bad Guys are out for the same thing the Pink People are. It’s all about Me and Mine and who gets to divide the spoils. Pinkies and the Wolves are opportunists in the midst of calamity. The sheepdogs, the Good Grey Guys, are driven to protect us from the wolves. They figure if we’re taken in by the Pink People’s lives of trivial pursuits, that’s our look-out. Theirs is to protect us from the Wolves so we can continue listening to the Bloviating Pinkies. Meanwhile, just get out of the way. 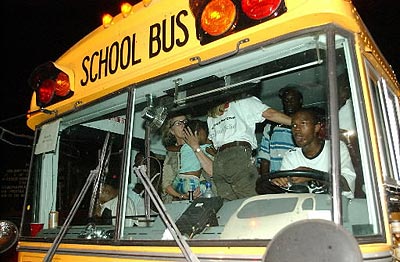 Which brings us to a young sheepdog, a very young Grey Guy who now has his credentials in hand. It’s Jabbar Gibson, of course. The young man — I’ve seen reports giving ranges in his age from fourteen to twenty years old — commandeered a bus and drove for thirteen hours to Houston. A novice who’d never driven a bus before drove non-stop, delaying only long enough to pick up strangers, to buy diapers, and to get more gasoline with money scrounged from passengers.

To underline the Grey Guy demeanor of this young man, he did not find the bus just sitting on the flooded street. He climbed the fence of a school and got the bus going. He opened the gate and he proceeded, with eight others, to get out of Dodge. This is a kid without a driver’s license (horrors!) who doesn’t have a car of his own. But those technicalities didn’t stop him. Nor did the possible fact that he’s probably never been out of New Orleans before. He started with young people —his friends and neighbors, no doubt — and slowly filled the bus with a motley assortment of strangers standing by the side of the road begging for help. One woman was carrying an eight-day old baby. There were old people. There were families. The de facto leader (another sheepdog), Miltralyn Isaac, helped Jabbar Gibson with stealing the bus. After that, except for having to scrounge for money for gas and diapers it was all down hill and green lights. No one had anything to eat, but at least they were out of New Orleans. At least they were alive.

If you are like me, you may be wondering why none of the gas stations where they stopped were curious about their plight, why no one offered food or extra money for gas. Were the passengers and the driver afraid to tell of their situation, knowing they were on a stolen bus headed over to a place that promised refuge and seemed safer than saying anything? When the movie comes out, it will be interesting to see if they cover that angle. Fear can keep us from asking for help.

Here’s my advice: take Mr. Whittle’s essay and hold it up against your own life. Use it as a mirror. Are you a Pink Person? Then “Let’s roll” will never pass your lips; it will never even enter your mind. Are you a grey wolf? Then you’re already considering ways to make money from this disaster. Perhaps you already have. Are you a sheepdog? Then you’re beginning to contemplate the things you need to do to make your family and neighbors safer in the event of disaster. And if you’re a true-grey sheepdog, you know there are no innocent bystanders, there are no safe “it-couldn’t-happen-here” places.

Disaster can happen anywhere. Unlike Mr. Whittle, I have never rescued anyone. But I’ve been in a restaurant I helped run, knee deep in flood waters and watching a Pacman machine floating out the door. I’ve been stranded for ten days in a snow and ice aftermath with not enough food and no diapers for my baby. I’ve known the rage of floodwaters, I’ve known the aimlessness of the swirling aftermath. I’ve seen the levee built and I’ve stocked up on food…the diapers are no longer necessary.

Mr. Whittle doesn’t say so, but the underlying message in his story is that we must become more self-reliant. I’m looking into that. Shortly I will know how much solar panels cost and what the best way to store dried food is. Guess I’m going to have to bite the bullet and learn how to shoot that nine millimeter I vowed to learn to master as a New Year’s resolution a few years back.

Time to ready the ground next month to put some tomatoes and beans and what-not where the zinnias used to grow. Time to prune the apple trees and spray them and take better care of what we have. Living on a ridge above the river will save me and mine from the fate of New Orleans. But the grey wolves are everywhere.

11 thoughts on “Sheepdogs Driving the Bus”