Varifrank is one of the best thinkers/analysts in the blogosphere. If I could I’d blogroll him twice. There is no one who can match him for content, style and authenticity. Very little of what he writes is for effect — and that itself is a major virtue in any writer.

Today we have this gem, taken from a list of things Varifrank says he learned from Katrina:

He has more to say on that topic, but this one stopped me in my tracks. Trolling around the other day, I’d been commenting somewhere (where? Find it) on a comparison between Bush and Lincoln. Ah, here it is, in the form of a response to a particularly deranged assault on Bush which appeared the other day in Shrinkwrapped’s comment section. Generally speaking, Shrinkwrapped has excellent commenters (she said modestly); you see very few trolls and most of those responding to his contemplative posts are quite thoughtful themselves. However, as the Baron is wont to admonish me from time to time, there are ticks everywhere, even in Eden.

Shrinkwrapped’s post concerned the necessity for maintaining a sense of perspective regarding Katrina. This makes his commenter’s venom all the more dissonant. Reading him, you get the impression he’s tone deaf. Here’s an excerpt, just so you understand what worries Varifrank and why he’s right to be concerned:

Amazing stuff, and that’s only a piece of it. The author received a stern rebuke from Shrinkwrapped, who points out the egregious behavior of the so-called psychiatrist who would (a) diagnose from a distance, or (b) know the person and thereby violate the boundaries of his profession.

What is of concern here, however, is the absolute certainty of the author. There is only one reality and that is unequivocal pacifism. Any other view makes one “compromised.” The fervor is matched only by the hatred of this person for his President and anyone who stands with him; you can hold your hand against the screen and feel the heat of his intense desire to see everyone but those who think like him out of power.

His vitriol brought to mind the kinds of things they used to say about Lincoln. They made fun of his wife, his appearance, his leadership, his speech, his social standing, his handling of the war. With Lincoln Derangement Syndrome, it was no holds barred. There was nothing one could say that was considered too scurrilous or below the belt when it came to lashing out at the loathsome Lincoln. 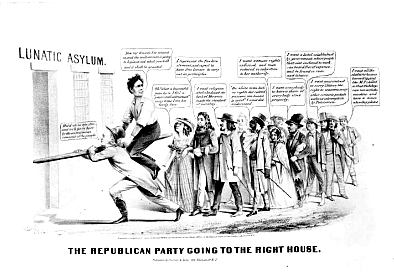 Bush Derangement Syndrome is just as ugly, primitive, and appalling. Shrinkwrapped takes this commenter to task and tells him to back his assertions with facts. Otherwise, he says, this is merely “partisan vitriol.” That seemed about right to me. Here is my response in the comments:

I hope Varifrank’s concern is misplaced, but in my heart of hearts I fear he is merely prescient:

UPDATE: Here is Neo-neocon’s response to this post. It has been moved here because it is disturbing and because it demands our concerned attention.

“…In early June I wrote a post about the parallels between the rabid hatred of Lincoln and that of Bush. Here it is. It turns out that the press’s hatred of Lincoln was definitely a factor in motivating Booth’s assassination of him. And here is an excerpt from the London Examiner published after the assassination:
‘It must be remembered that atrocious as was Booth’s deed, his ‘sic semper tyrannis’ was literally justified by the facts. The man he killed had murdered the Constitution of the United States, had contradicted and set at naught the principles under which the States came together, had practically denied the competence of the signatories of the Declaration of Independence, and overthrown all for which Washington fought and Patrick Henry spoke.’

This is not only chilling, it is criminally libelous. Or slander. Or whatever sin you care to debate when someone is not satisfied that a politician with whom they disagreed is assasssinated. They further damage a dead man who was murdered by a a coward who ran away. They distort with hyperbole that with which they disagree. Like the fury of the commenter on Shrinkwrapped, they spew a murderous rage that isn’t even satisfied with the death of their opponent.

This kind of infantile need to spoil and annihilate must stop. The MSM, in what is obviously a very ancient meme, is responsible for the death of many. If they do not stop their idolatrous, meticulous attention to every whack job who comes down the pike spewing hatred that mobilizes causes to which the MSM is sympathetic, then they must be held responsible for what happens as a result of their attentions.

I welcome suggestions — not diatribe, but real, practical suggestions — as to what might be done to change the direction, momemtum and aim of this train trying so hard to run Bush down and to harm our country. To unseat him or to kill him — they don’t seem to care which. If their adulation of Cindy Sheehan is not proof of that perfidy, then nothing is.

If nothing else, we could turn off the news. That’s a small but significant beginning. Just because the MSM attends to Ms. Sheehan and her ilk, it doesn’t mean we need to do so. Having given up TV news twenty six years ago, I promise you won’t miss it. Having given up NPR about four years ago, I can promise you’ll be pleasantly surprised when you’re not being sniped at anymore.

Meanwhile, get a good biography of Mr. Lincoln. If you’re used to listening to the news in the car, get a history book on tape or CD instead.

2 thoughts on “A Not-Very-Civil War”