Genocide has been one of Islam’s preferred methods of negotiation since the time of the Prophet. One of the first things Mohammed, a man with a tendency to hold a grudge longer than most, did was to lead his followers in a systematic extermination of the Jewish tribes in his homeland as soon as it was politically feasible. In the centuries since then Muslims have slaughtered untold numbers of infidels, exterminating whole communities of Christians, Jews, Hindus, and other non-believers wherever Islam has taken hold. In particular the vibrant and varied Christian communities in the Middle East were annihilated very early, leaving a black hole that impoverished and changed forever the composition of Christendom itself.

The Grand Mufti of Jerusalem, Haj Amin al-Husseini, was one of Hitler’s great admirers, and helped organize an Arab alliance with the Nazis during World War II. His reasoning? The Germans were undertaking the most worthy cause, one that the Arabs could wholeheartedly support. He was more than simply a casual collaborator; he rivaled the most dedicated Nazis in his zeal for the Holocaust:

Observing their actions rather than attending their to their words, it is plain that genocide of non-Muslims is a never-ending project central to Mohammed’s followers at all times and in all places; the numbers of dead infidels rise and fall strictly according to political expediency of the moment. After seeing lists of the numbers killed — 100,000 here, 300,000 there — the mind grows numb. Of what consequence is a million or more in Armenia? Or North Africa? Or in Indonesia — one of the more recent locations where the Religion of Peace applied its standard, time-honored methods of death-dealing?

But modern Turkey is supposed to be different from its Ottoman predecessor, isn’t it? Turkey is enlightened and progressive; it is “Western”. Besides, that Armenian genocide is old news. Anyone in Ankara can tell you it is all fabrication anyway. Such events, if they ever happened, have nothing, absolutely nothing, to do with the Turkish Republic. Or do they?

Take a look at this story from the Assyrian International News Agency:

Fjordman and others have long been making a strong case for denying Turkey’s entry into the EU. Political correctness aside, Turkey’s membership in the European Union would officially and legally open the floodgates for the torrent of Islamists to pour into the heart of Europe. The consequences — further tipping the demographic slide into a de facto Eurabia — would mean permanent dhimmitude for all of Europe. If anyone wanted a wake-up call in order to be there to observe the cultural divide between Turkey and the West, here it is.

Interestingly enough, it is Turkey’s legal community leading the charge against this gathering:

As usual, whenever trouble is afoot, there be lawyers. 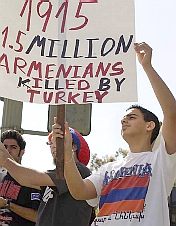 Turkey wants to erase from history and memory what it did in Armenia in 1915. When “national dignity” is at stake, what harm is there in a little amnesia? The rest of the world seems willing enough to go along; after all, in the US we have Kate Moss and the Mourning Mother — along with a little manipulation by the MSM — to distract our attention.

Those mounds of skulls in Armenia, those mass graves in East Timor, the torched villages in central Africa — what are they to us? They happened a long time ago, in a galaxy far, far away.

But the Turks may as well face their reality: the Armenians will never forget. Never.