The next time someone wants to bloviate in front of you about the horrific ignorance of Americans regarding history, tell them this story, originally reported in Le Canard Enchaine and followed up by Haaretz:

Once upon in time, in September of 2005, the French Foreign Minister made an official state visit to the new Holocaust museum in Jerusalem’s Yad Vashem. This worthy showed great interest in the displays and asked many questions, especially concerning the maps of Europe from the period of World War II, the ones showing the destruction of Jewish communities.

At one point, Monsieur le minister asked if British Jews were also murdered:

Unfortunately, he was not content with placing merely one foot in his mouth. Raising the other to his lips, and with that inimitable Parisian elan, shoving it into his cakehole, the French foreign minister inquired further:

Since the story was reported originally by Le Canard, a satire magazine, its veracity was uncertain. In other words, no one could quite believe a man of his standing could be such an ignorant twit. But he was. He is.

Of course, the French foreign minister did not return to his embassy in Israel and tell them he was a horse’s ass. They didn’t find out about his stupidity until they read it in a satire rag. And George Bush is stupid?? Uhn huh. Sure.

Meanwhile, the spokesperson for the Holocaust Museum expressed the hope that this visit was “enriching.” It certainly was — as in “that’s a rich one.”

Here’s what Haaretz has to say about Monsieur le ministre:

Perhaps they mean the temperature has gone from glacial to zero. 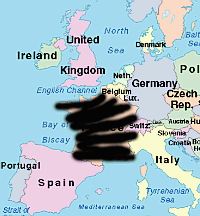 Meanwhile let’s hear no more remarks about our high school graduates who can’t find Fwance on the map. Instead, let’s take a page from the Arabs, who teach their children that the Zionist entity doesn’t exist. We can do the same for our Gallic “friends”: we can eliminate “the Gallic Entity.”

Let’s get some black magic markers and rub out France.

5 thoughts on “It’s a French Thing”