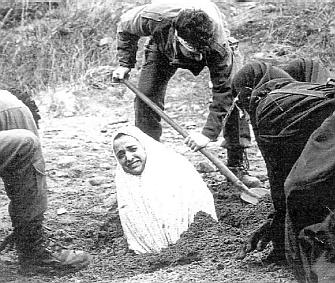 Shar’ia, Islamic law, is concerned with three ideas: punishment, prevention by example, and retaliation. Rehabilitation is no more a part of the judicial vocabulary than, say, the word “democracy,” unless one considers fear of the consequences a type of rehabilitation.

Penal laws are termed hudud, meaning ‘limits.’ These limits are actually the punishments themselves and their ramifications Thus, the Islamic penal code is can be considered from three dimensions: the criminal, society, and the victim. In the first case, punishment is supposed to ‘purify’ the miscreant; in the second, punishment is considered a preventive measure designed to discourage others from breaking the law; and lastly it serves as a form of revenge for the victim of the crime.

There are hierarchies of crimes. The most serious is hadd, followed by tazir, and last, a separate category termed qisas. More simply put, they are crimes against God, against society, and against individuals.

Let’s take them in ascending order:

Qisas means ‘balanced.’ It is retribution, revenge or compensation, depending on the circumstances. The offenses — murder, injury, manslaughter, etc.,– can result in execution for the more serious offenses or, instead, some form of compensation (diyas) to the victim or his family. Qisas is the more flexibly applied punishment since these are considered crimes directed at individuals rather than society or God. These are not offenses listed in the Koran.

Tazir means ‘deterrence.’ This group of offenses is comparable in some ways to misdemeanors in Western law, though there are exceptions. Espionage, for example, can carry the death penalty. In Shar’ia they are considered crimes against society and thus less serious offenses than the ones listed as hadd. Tazir crimes are not written down; they are freely interpreted by the particular judge and community. Again, these are not Koranic offenses.

Hadd crimes are of a different order. These are offenses against Allah and carry very specific — but always corporal — punishments. The first three — murder, apostasy, and adultery — are punishable by death. Defamation (i.e., false accusation of adultery or fornication), robbery, and alcohol consumption have lesser punishments prescribed for them. There is a long history of conflict among Islamic scholars regarding specific types of punishments. When Tariq Ramadan came out recently with a call for a moratorium on corporal punishment he was roundly condemned by prominent Islamists for starting down the slippery slope that would lead to the end of Islam.

Cutting off a thief’s hand seems extreme by Western standards, but it doesn’t compare to ramj, the sentence for adultery. Ramj means stoning, and Islamic law means it when it says “stoned to death.”

The ritual is specific and ugly; even in this, women have it harder: law prescribes that should a condemned adulterer manage to get away, he or she may go free. Thus, a man is buried up to his waist; a woman’s arms are tied and she is buried up to her chest.

This medieval holdover — much of Islam appears to be medieval — should be done away with as soon as yesterday. Every time someone excuses Muslims’ more atrocious behaviors on the basis of multicultural “understanding” they help murder someone else.

5 thoughts on “By The Book”