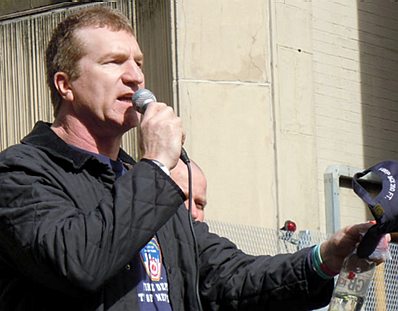 Kevin Carroll, the Chairman of the British Freedom Party, was arrested in Luton on Saturday for making a comment on Facebook.

“Boy oh boy, Baron,” you say, “that must have been a really dangerous comment! What did he do? Call for killing people? Did he incite rebellion against Queen and country?”

Well, actually, no. It wasn’t anything like that. This is what was posted:

“They are all backward savages, a devil-spawned death-cult worshipping all that is unholy and barbaric. Pure evil.”

Screen shots of the comment “allegedly” made by him were provided to the police, and that was enough to have him arrested for the crime of Religious and Racial Hatred. He has now been bailed with conditions, and has to sign in at the police station twice a week.

A reliable source reports that he was on his way to a meeting in Luton when he noticed he was being followed. The men in blue all pulled up around him, with pepper spray, flashing lights, the whole police state rigmarole.

They swooped down on me, blues flashing and sirens wailing — you would have thought I was a serial killer or something. Right in the middle of the town centre!

“Religious and racial hatred,” is what they called it. I’ve been bailed again for four weeks approximately, and have to sign on at the police station Tuesdays and Fridays.”

An EDL supporter writes with this recommendation for anti-sharia activists in Britain:

I suggest that everyone posts this [“a devil-spawned death-cult” etc.] as their Facebook status. Let them arrest thousands of us!

All the solicitor has to do is refer to suras in the Koran to find religious hatred in abundance. Then they should go and arrest every Muslim in this country who prays five times a day to this evil book of hate.

28 thoughts on “Whatever You Do, Don’t Say “Devil-Spawned Death-Cult””