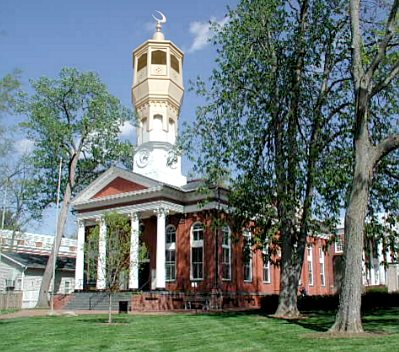 As we reported yesterday, the Turkish Islamic supremacist Fethullah Gülen had proposed to establish one of his science-technology charter schools in Loudoun County, Virginia. Last night the Loudon school board voted against accepting the application.

This is a major accomplishment, and all of those dedicated anti-sharia activists who made their opposition vocal should be congratulated on their success. However, this was only a skirmish in a much larger war, one that extends throughout Northern Virginia and the whole of the United States.

Here’s the press release from The Center for Security Policy with the good news:

WASHINGTON, D.C.: Last night, a select committee of the Loudoun County School Board recommended the disapproval of an application for taxpayer funding of a charter school linked to Turkish Islamist Fethullah Gülen. Two of the three members recommended rejection of the application outright; the third called for delay of its consideration “for cause.”

This outcome is a huge, if preliminary, victory for citizens who have come together to oppose the public funding of a school associated with the Gülen Movement in the Virginia county west of Washington, D.C. The Loudoun Math and Information Technology Academy (LMITA) application will now go to the full School Board, which is expected to consider it over the next two months.

It is to be hoped that the Board’s deliberations will be informed by the following notable developments:

The briefing illuminates the pattern employed by Gülen and his cult-like Turkish supremacist Movement to induce school boards to charter and pay his followers to establish vehicles for indoctrinating impressionable American students, usually under the guise of enriched science, technology, engineering and mathematics (STEM) education. At its core, this pattern involves deception with respect to the true character of the proposed school, its association with the Gülenists, and the myriad problems such Gülen academic institutions have presented to school system administrators and taxpayers from Texas to Maryland.

In the wake of the select committee vote, Mr. Gaffney said:

The committee is to be commended for its appreciation that Loudoun County does not need and should not allow the establishment there of a Gülen school at taxpayer expense. Every effort must now be made to ensure that the full School Board arrives at the same, prudent conclusion by understanding and acting upon the true and unacceptable nature of the Gülenist penetration of America’s public school systems.

For more information visit The Center for Security Policy.

2 thoughts on “No Sharia in Loudoun County — For the Moment”