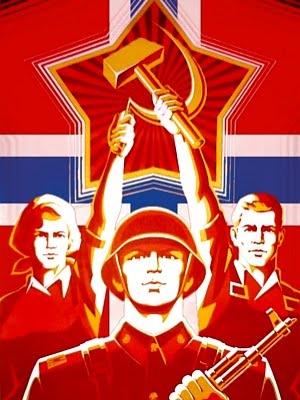 The following article describes a proposed law that was brought before Parliament today in Norway. Its purpose is to criminalize “hate speech” on the Internet — the sort of thing that Hillary Clinton has been salivating over since the Istanbul Process began last year.

The examples described in the article would lead the average reader to believe that the principal targets of the law would be neo-Nazis and “Islamists” who advocate and/or plan to murder people. However, given the high-tech lynching that has been administered to Fjordman over the past seventeen months, it’s a safe bet that ordinary non-violent dissidents — identified by the Powers That Be as “right-wing extremists” who “inspire” the likes of Anders Behring Breivik — will also be in the crosshairs of the fully totalitarian sharia-compliant Norwegian state.

Fjordman sends these remarks about the proposed legislation:

The excuse they use for this law is what could be seen as threats against the police posted by some stupid person on his blog.

As another excuse, they also use the comments made by militant Muslims.

None of this changes the fact that this proposed law contains totalitarian impulses designed to silence peaceful dissidents using the Internet.

Many thanks to our Norwegian correspondent The Observer for this translation from VG.no:

The Government wants to criminalize hatred on the internet

It could be a lot easier to prosecute online hate speech in the future if Minister of Justice, Grete Faremo gets the go-ahead for a new quickly drafted law following the ‘blogger case’ in Bergen [city on the west coast].

The proposal will be submitted to Parliament on Friday. The government wants to have the option to prosecute people for hate speech and incitement to criminal activities in a Norwegian court, no matter where in the world the statement was made.

“I think it is high time that we are given the legal means to pursue criminal speech on the Internet. The bill will correct the deficiency of the current law, as pointed out by the Supreme Court in the so-called ‘blogger case’ earlier this summer,’ says Faremo AP [Labour].

The police dropped the case against the so-called extreme blogger Eivind Berge after the Supreme Court ruled that it didn’t consider a written message on a blog to be a public statement. They relied on a 110 year old definition of criminal law, because the new Penal Code of 2005 hasn’t, for a variety of reasons, come into effect yet.

A few weeks before his arrest last summer, Berge wrote on his blog that he planned to attack a policeman with a knife on Torgallmenningen [the city square] in Bergen.

The majority of the Supreme Court’s appeals committee pointed out, however, that calls for the killing of police officers on the internet is clearly a crime, even though it falls outside the current definition of a public statement.

The bill could make it easier for police to prosecute Norwegian Islamists for statements made on social media.

This translation came in early this morning, and I haven’t yet heard what happened in Parliament today. Stay tuned for further news on this topic.