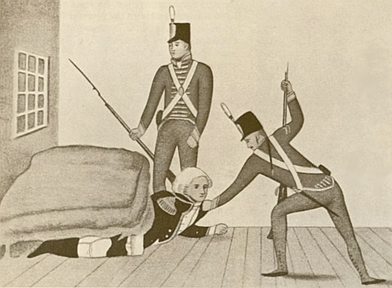 Our Norwegian correspondent The Observer wrote last Saturday about the timidity — in some cases, one might say cowardice — of Norwegian intellectuals who oppose sharia. These are people who object to the Islamization of their country, but who also object to any attempt to take practical measures against it. They find the people who stage public protests — courageous folks who actually put their careers and physical well-being on the line — somehow wanting. These action-oriented people are less than admirable. They’re deficient in certain respects.

In short, ordinary Norwegians who protest against mass immigration and sharia do not quite meet the exacting standards of well-educated academics and journalists who object to the same things in theory. Up until now, no praxis attempted against Islamization has been ideologically acceptable to them.

Norwegian intellectuals are hardly alone in this regard; the same phenomenon may be widely observed throughout the West. Most mainstream writers who dare to raise the alarm about Islam are fastidiously avoidant of any measures that might have a chance of reversing the current suicidal trends in our culture. Day after day they publish outraged accounts of what is happening — example upon example of violent, destructive, murderous Islamic behavior, and the craven submission to it displayed by Western dhimmis — whilst remaining unable or unwilling to contemplate what sort of action might be required to change the course of events.

Any organized attempt to effect change — whether by the EDL, Generation Identitaire, pastor Terry Jones, or any other grassroots activist group or individual — is deprecated and eschewed. The phrases “neo-fascist” and “right-wing extremist” pop up with distressing regularity.

I ran into two prominent new examples of the genre just this morning, one by an American and the other by a Briton. Rather than identify and argue with either author, which would only provoke yet another intramural food fight, I’d like to examine the larger issue.

What is it with Islam-critical Western intellectuals?

Why are so many of them reflexively allergic to any actions that might plausibly effect the changes they so fervently desire?

Most intellectuals who oppose Islamization are susceptible to a debilitating illness that I have dubbed “The Screaming Nazi Heeber-Jeebers” (known as SNHJ among those of us who have cause to discuss it frequently).

The symptoms of SNHJ tend to emerge when the average Counterjihad intellectual is called a “neo-Nazi”, a “racist”, a “neo-fascist”, a “xenophobe”, a “bigot”, or any of the other epithets commonly applied by leftist intellectuals to those who oppose Islamization and mass immigration.

…and all the other futile attempts to deflect the “hate” charges being flung at him.

For those suffering from the most serious cases of SNHJ, even the term “nationalist” may induce all the frantic symptoms of aversion and repudiation — as if one could object to one’s nation being overrun by barbarians without in fact being a nationalist.

During the most serious crises, a typical Counterjihad intellectual will hide under the bed and stay very, very quiet until the uproar is over. The first time I noticed such behavior was during the early skirmishes of the LGF Wars, when Charles Johnson flung “neo-fascist” accusations in all directions with wild abandon. Those who were spared the gaze of his lidless eye went preternaturally quiet. They mysteriously forgot their aversion to such smear tactics, while those on the receiving end suddenly found themselves all but alone.

The worst such crisis to date unfolded during the immediate aftermath of the Breivik massacre last year. Any Counterjihad activist fortunate enough not to be mentioned in the Manifesto quite understandably kept his head down and his mouth shut. Those who merited a notice in the Book of Infamy could be divided roughly into two groups: the defiant and the repudiators.

The defiant ones stood fast. They had long known the stakes of their participation in the movement, and were ready to take whatever was heaved at them. What are principles, after all, if you fling them away at the first whiff of grapeshot?

In contrast, the repudiators said, “This has nothing to do with me. Some of these other people — Fjordman, perhaps, or Bat Ye’or — may deserve the label of ‘Breivik’s mentor’. But not I — I have nothing to do with bigotry and xenophobia. I hate racism!”

The pathetic reaction of the latter group is a textbook example of the Screaming Nazi Heeber-Jeebers in its most acute phase. Fear has overwhelmed all other responses, and the afflicted sufferer will do almost anything to escape the glare of the klieg lights and return to his former existence.

Such are the manifestations of the disease. But what about its etiology? How do otherwise healthy intellectuals develop such a syndrome?

The answer may lie in the training and conditioning to which academics and journalists are subjected. Contrary to their own confident self-evaluations, most intellectuals are of no more than average intelligence. They attain their exalted positions through extensive (and expensive) training and networking rather than by their own innate abilities.

To be accepted into the distinguished company of intellectuals, one must first adopt the received Narrative. One is permitted to deviate from the strictures of that Narrative only within certain narrow and well-defined limits. The Counterjihad is by definition outside those limits, so that a display of even the mildest version of Islam-critical thinking puts one beyond the pale.

This is something that is instinctively understood by any member of the academic club, even those who have been brave enough to oppose Islamization. They have seen the precipice towards which their culture is plunging, but they know that talking about it is a mortal sin against the Narrative. Hence their continual efforts to hedge their Islam-criticism with restrictions and contexts and provisos in a futile attempt to make themselves acceptable under the Narrative, and thus remain in the exalted club. Nothing renders them more fearful than the prospect of being blackballed from the club. The incidence of SNHJ among such academics simply indicates the depth and breadth of that fear.

So they attempt to stay within the boundary fence. They feel it is acceptable to write about the depredations of Islam. They are willing to be outraged. They deplore. They censure. They abhor. They criticize. Week after week, year after year, the deploring and abhorring continue.

But actually doing anything — why, that would most emphatically violate the Narrative! So it can’t even be considered.

These poor souls long to retain most of the Narrative whilst rejecting one piece of it. They don’t seem to understand that their opposition to Islamization has already rendered them permanent outcasts — they may as well put on their boots, pick up a placard, and join the rest of the movement down on the street.

For a journalist or academic with Islam-critical tendencies, one of the side effects of the Screaming Nazi Heeber-Jeebers manifests itself in disapproval and condescension towards those of less exalted intellect who share the same sympathies. As a result, intellectual writers observe in their unwashed brethren some of the following characteristics:

Vulgarity. The rubes out there on Main Street with their misspelled signs and distasteful slogans might become acceptable if they quoted Plato or Descartes more often and gave up the pig cartoons and burka costumes. What we need here is sympathy… and taste.

Violence. Some of these benighted fellows tend to get a bit boisterous, especially when they’ve had a few. We can’t have that, can we? And if the leftists throw rocks and bottles at them, well… why can’t they be more like Gandhi?

Intolerance. This rabble out there protesting in the town square — look at some of the cartoons on their signs! Why, you might think they really don’t care for all those foreigners in their midst! I’m all for resisting Islamization, but not at the expense of true tolerance and openness.

Nationalism. I abhor the rapes and muggings and murders and arson as much as the next man, but these national flags all over the place are just too much. It’s unseemly. Why can’t we object to the violations of the Universal Declaration of Human Rights without bringing up the discredited nation-state?

The SNHJ sufferer hopes by such condescension to avoid being rejected by his intellectual peers. He doesn’t realize that it’s no use — his opposition to Islamization, weak dishwater though it may be, has already rendered him unfit for polite company.

The guardsmen of the Narrative will eventually winkle him out of his hiding place under the bed, pull off his wig and his gaiters, and throw him into the stocks for a well-deserved public shaming.

But what if he crawled out from under that bed of his own volition, and stood up proudly alongside his fellow Counterjihad activists?

8 thoughts on “Come Out From Under That Bed!”