Devout Muslims who move to Europe, Australia, Canada, and the United States expect that their customs and practices will be tolerated in their new home.

We, the kuffar of the West, are expected to accept those long beards, the beanies and nightgowns, and especially the black bags over their chattel women. We celebrate our diversity by being tolerant of the exotic ways of newcomers from distant lands.

And the same thing is true of our hosts when we visit the heartland of the Islamic world, right?

Surely Westerners who vacation in Qatar can expect that their customs and attire will be acceptable to the natives…?

Mind you, we’re not talking about permanent residence, just a brief visit to enjoy the sun and sand and skyscrapers and raw sewage in the surf.

Not to build a church or anything, haha! No, no, we’re not that stupid!

No, we just mean shorts and tank tops and maybe some nice sundresses that show a little tantalizing cleavage… 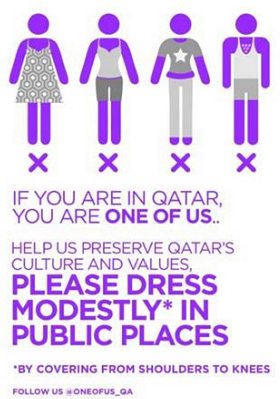 Below is an article about the modesty campaign in Qatar:

‘One of Us’ campaign not compatible with 2022 World Cup, web

Called ‘One of Us’, the women’s campaign wants to ban shorts, sleeveless shirts, and revealing dresses. “Help us preserve Qatari values and culture. Please dress modestly in public spaces, covering knees and shoulders,” reads the campaign flyer. “We’re not trying to impose the hijab (traditional Gulf-area long black tunic and veil), just a modest way of dressing that won’t force us to see too many body parts when we’re in public,” said campaign organizer Najla Al-Mahmoud. The country’s tourist board decided to sign on to the campaign, which was launched in June, to make tourists feel welcome and help them avoid embarrassing situations, according to Doha News. The emirate’s penal code bans what is considered to be indecent clothing in public.

The Qatari international community, which makes up 95% of the population, commented on social media that such a campaign is not compatible with a country hosting the 2022 World Cup, which will attract thousands of tourists.

Other web commentators pointed out that modest apparel is the least of Qatari women’s problems: the disparity between men’s and women’s salaries rose 22.7% over last year, data from the emirate’s statistics bureau showed. Both Qatari and foreign women are paid 25-50% less than their male colleagues, according to the data.

10 thoughts on “You Will Be Assimilated”