I began this post a couple of weeks after the events of September 11, 2012, and have continued to peck away at it in bits and pieces in the weeks since, whenever I could find a little spare time.

It gradually morphed into a lengthy treatise, much longer than I originally expected. At Dymphna’s suggestion, I will be publishing it in several parts, beginning with this introductory post. 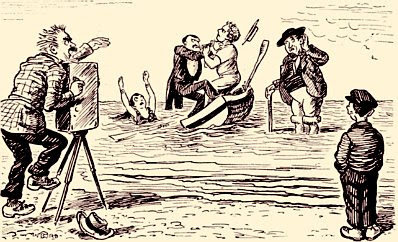 There’s an old joke that Garrison Keillor used to tell (and probably still does) about a Swede who decided to take off early from work one day.

He came home, walked into the bedroom, and found his wife sitting on the edge of the bed. He was astonished to see that she was naked, and crying bitterly.

“Ingrid, my darling!” he exclaimed. “Why are you sitting there with no clothes on, crying?”

“I’m in despair because I have nothing to wear,” she replied.

“Nonsense! You have plenty of clothes in your closet.” The Swede opened her closet door and proceeded to flip through the dresses on their hangers. “See, you’ve got a red dress… and a blue dress… and a green dress… and a polka-dot dress… and Sven…”

I dusted off that old chestnut to remind our readers that things aren’t always what they seem.

This is especially true when the apparent circumstances are bizarre and anomalous. When current events don’t make sense, there is probably more going on than meets the eye. Discovering the underlying pattern may not be easy. It may be impossible to draw definitive conclusions. Nevertheless, a bit of intelligent investigation accompanied by the judicious application of Occam’s razor can sometimes generate useful theories that fit all the observed facts.

The recent Middle East crisis (and the domestic political blowback in the USA) is a case in point. There are so many aspects of it that don’t make any obvious sense. Just to list a few:

Those are just a few of the questions that could be asked about puzzling aspects of the Long Hot Arab Summer. But one more needs to be appended, on a seemingly unrelated topic:

It’s time for us to open the closet door and see what may be crouching there amongst all the pinafores and the frocks.

The following conjectures about the overlapping scenarios behind the current crisis are entirely speculative. Under the circumstances, an amateur can do no more than speculate.

However, fictitious scenarios may still serve as a useful tool. When the observed facts seem incongruous, inexplicable, and contradictory, even an amateur will want to assemble the available background data and subject his hypotheses to the test of common sense.

As with the Breivik case last year, the end product must remain conjectural — a fiction about what might have happened.

The preferred result will be a tale that fits as many facts as possible without multiplying entities needlessly.

As far as the Days of Islamic Rage are concerned, the surface of events — the version that is retailed on the nightly TV news or printed on the front pages of newspapers — is inadequate as an explanation.

Intrigue is obviously underway in the background. However, the various figures that contend behind the scenes are not necessarily all part of the same alliance, nor do they share the same motivations. Teasing out the distinct and overlapping webs of intrigue is the hardest part of building a fictional scenario.

For example, one of the common assumptions is that the Obama administration is monolithic in its approach to the Middle East and the Muslim Brotherhood, but there is no logic that requires this assumption, nor any empirical evidence to support it. Secretary of State Hillary Clinton is an intelligent player with her own ambitions. Despite their broad philosophical agreement, her agenda may well differ from that of President Obama and the Communists in his entourage.

An even bigger gulf exists between the goals and strategies of the Muslim Brotherhood and those of the United States government. Each side believes it can manipulate the other to its own advantage, and is willing to postpone an inevitable confrontation for the time being in pursuit of its long-range goals. Each presumably believes it can ultimately checkmate the other in this global game of ideological chess.

Thus we may assume a set of interlocking intrigues, each with its own logic and calculation of advantage.

In our speculative fiction about the current crisis, there are three principal figures hidden in the wardrobe: Barack Hussein Obama, the Muslim Brotherhood, and the movie Innocence of Muslims.