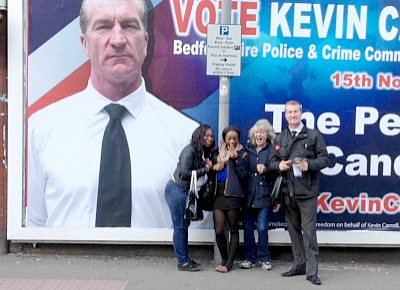 As regular readers are aware, EDL leader Kevin Carroll is running as the British Freedom candidate for Police and Crime Commissioner in Bedfordshire.

We reported last weekend that the destruction of Kevin’s campaign billboards appears to have been officially requested by the Luton Borough Council, and was carried out with the collusion of the police.

The story has finally made it into the local Bedfordshire MSM. The following article was published yesterday in Bedford Today:

Two campaign posters for the British Freedom Party’s police and crime commissioner candidate have been taken down.

One poster, in Hibbert Street, Luton, had had a Hitler moustache painted on the face of candidate Kevin Carroll. A swastika had also been painted.

Luton Borough Council said yesterday that it had asked advertising site owners, Primesight, to remove offensive graffiti resembling a swastika from a British Freedom Party poster, but “did not request for the poster to be removed”.

But Mr Carroll said he had already spray painted out the graffiti himself, meaning the swastika was no longer visible.

He said: “Both my posters have been completely removed. They were legitimate legal advertising boards in an electoral campaign.

“The democratic process is being interfered with. I’ve reported it to the police and put a complaint in to the Electoral Commission.”

Below is the press release posted today on the British Freedom website:

We’d Get a Fairer Election in Zimbabwe

The billboards were both in strategic Luton locations, with the potential to reach tens of thousands of voters.

The sequence of events was as follows:

Kevin Carroll has responded angrily to the official action, calling it criminal interference in the democratic process.

He said that the posters displayed nothing offensive and were designed simply to raise public awareness of his candidacy and to direct voters to his campaign website. He is appalled that in a supposedly free country a local council and police force can apparently get away with disrupting and distorting an election campaign.

He accuses both Luton Council and Bedfordshire Police of overstepping their powers. His party, British Freedom, has submitted a formal complaint to the Electoral Commission and will be demanding an independent public enquiry.

If that enquiry confirms wrongdoing, it will have serious implications for the future management of policing in Bedfordshire.

If Mr Carroll is not elected, he will be filing for a re-run of the election with independent external monitoring to ensure that it is conducted openly and impartially.

One thought on “We’d Get a Fairer Election in Zimbabwe”