Green Infidel was at yesterday’s Independence March in Warsaw, and has sent this preliminary report. A more detailed account will be coming later.

As expected, the authorities arranged for violent provocateurs to take center stage and attract major media coverage. The following account, by someone who was present at the event, will act as a counterpoint to the MSM’s chronicle of “the confrontation between right-wing nationalists and police”. 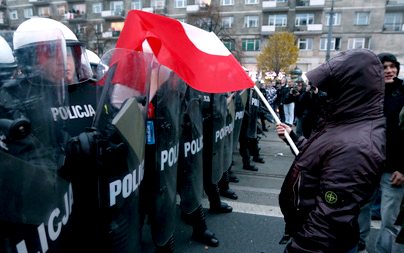 This year’s independence march had a similar form, although a different route to the previous year, going from the Palace of Culture and finishing at Marshal Pilsudzki’s statue. For the first two hours we were blocked in by police and prevented from marching, but eventually it was allowed to start. Like last year, there were many instances of police and authorities making it difficult to get to the march, and police provocation on the march itself. Websites here are now filled with pictures of “undercover” police officers among the “football hooligans” of the independence march (for example, here). I myself saw a large column of plain-clothes police in balaclavas walking behind the riot police. Naturally, where there were “undercover officers”, violence followed… but for the most part, the march was peaceful (the part of it not on TV — and the part I was in, in any case).

Estimates of how many were present range from 20,000 (TVN television) to 100,000 (the march organisers). However this year’s march was definitely far bigger than last year’s and, seeing as recently similar anti-government marches brought 100,000 people onto the streets, I’m more inclined to believe this latter figure. There were also many Hungarian flags — around 1,000 Hungarians were estimated to have travelled to it.

This was just one of several marches in Warsaw on Poland’s independence day. The other 3 were:

Although on the face of it, the march was unrelated to the counter-jihad, there are some parallels:

Although there is one important difference: here in Warsaw, there were no “anti-fascists” anywhere to be seen. Instead, they grouped together (probably for their own protection) on the other side of the centre. Instead, the main conflict was with police. After the march, I walked through the centre with a large Polish flag — but still could not find an anti-fascist. Instead, there were lots of others with Polish flags from the march.

Here is a report from the (as ever impartial) BBC.

And footage has emerged of “football hooligans” with olive balaclavas throwing rocks at riot police — exactly the same type of olive balaclavas worn by those in photos next to riot police, and that I saw marching behind the riot police. In the video, those around the stone-throwers are already shouting “police provocateurs!”

And two more videos have emerged — one of a ten-year-old boy saying that police beat him. And another film by his father, separated from his son by riot police, shouting at them that “there’s kids there.” (I’m writing from a mobile and don’t have access to video, but can send links later.)

A woman I talked to at the march said she saw a man chanting at the police “What are you doing?” and then getting beaten by three police officers with batons.

And lots of other similar stories.

There were not only nationalists there, but those primarily opposed to leftists. Which is why this year’s march did not end at the nationalist Dmowski’s statue, but went further to his rival — Pilsudzki’s.

But of course the only news on the BBC and Polish media was of “violent nationalists” attacking “peaceful police”. Thankfully the internet is here to show how absurd this line of thinking is.