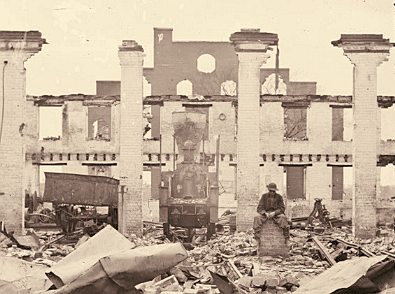 As Dymphna mentioned on Monday, the theme of this quarter’s fundraiser is “Aftermath: In the Wilderness”. The proximate inspiration for this week’s theme was the recent reelection of Barack Hussein Obama, which has cast old-fashioned liberty-loving conservatives like us into something resembling the outer darkness.

But our theme has, as usual, expanded into other areas. My own aftermath might be said to have begun in 2006, when I lost my programming job. It wasn’t because of my “Islamophobia” — the blog was just getting started in those days — but a result of corporate changes in the company where I worked, plus the need to be closer to home to take care of Dymphna as her illness progressed. New programming jobs in our local area are rarer than hen’s teeth, so I’ve had to eke out a living as a sole proprietor doing a variety of things, taking whatever opportunities come along.

Which brings me to why we have to annoy our readers by begging for money for a week once a quarter.

I know at least four people in Britain who have lost their jobs after being outed as Counterjihad activists. Several others on the Continent are in the same boat. I’m also aware of three people here in North America whose jobs are at risk for similar reasons.

In other words, my situation is not that bad, relatively speaking. I have no career left to worry about, and I can write what I want — for the time being, as long as the First Amendment holds. But when I went fully public several years ago I effectively foreclosed any possible employment opportunities for myself doing anything other than menial jobs. A quick background search on my name would turn up all those dangerous Islamophobes I hang out with. Not to mention Breivik — with whom I never hung out, but that makes no difference, of course.

So, given my advanced age, plus the indelible stain with which I have sullied my name, I’ll be staying in this line of work from now on, supplementing it with whatever editing and programming jobs come my way via other members of the Vast Right Wing Conspiracy.

This is why we hammer on our readers once a quarter. If you like what we do, and think it is worthwhile, and want to see it continue, please make the tip cup on our sidebar clink with whatever mite you can spare after the government has vacuumed up most of your paycheck.

If you want to see how bad an aftermath can get — in this case, the aftermath of July 22, 2011 — look at Norway. As The Observer reported yesterday, academics in Norway risk their careers if their writings are translated for Gates of Vienna, or even cited here with approval.

Norway is now a full totalitarian state, with all the necessary means for repressing dissent. Yet the Nordic frog has been boiled so slowly that most Norwegians seem unaware of what has been done to them.

It’s hard to imagine the level of oppression that is now considered normal in places like Norway, Sweden, and Britain. Social ostracism, physical harassment, the loss of one’s livelihood, the denial of government benefits, arrest and imprisonment — all of these are now an everyday reality in much of Europe for people who dare to speak out publicly as I do. My life is a bed of roses in comparison!

I’m very lucky to live in the USA. It makes me more determined than ever to help provide a platform for European dissidents. The U.S. Constitution still offers me some measure of protection, and I will continue to take advantage of it as long as I can.

As Walt Whitman wrote in “Leaves of Grass”:

Yesterday’s donations came in from the following places:

Many, many thanks to all who gave so generously.

2 thoughts on “The Lean Years”