A slightly different version of the following article by Elisabeth Sabaditsch-Wolff was originally published yesterday at the Free Tommy website. 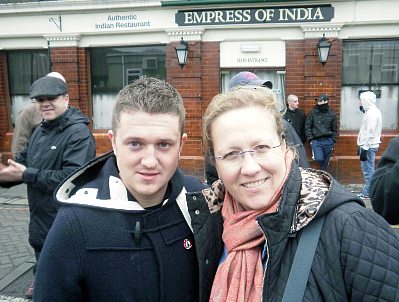 My friend Tommy
by ESW

I first met Tommy in February 2010, when I was invited by the EDL to speak at one of their rallies in Luton. At first I was apprehensive about the event, not because of Tommy or the EDL, and most certainly not because of the reputation that preceded the EDL and its charismatic leader. I am not fond of the masses, scared of them.

However, I was impressed by the organizational skills exhibited by the EDL on the ground. Despite the EDL’s reputation of being made up of thuggish and drunk football hooligans, I can vouch that they are not thuggish, but rather beer-drinking football fans who just happen to love their country, contrary to the real thugs: the likes of Abu Qatada and the grooming gangs who roam the streets instilling the Koranic terror into the infidels. I was treated in a friendly and respectful manner; I felt safe at all times.

Tommy rocked the event. He has a knack for telling things as they are. He is not rude, not at all, but he is harsh in his criticism of the authorities’ complicity in the ongoing downfall of the United Kingdom.

Tommy’s and my paths have crossed again in the time since. The last time I saw him was in Brussels last summer. We convened at the European Parliament for a conference on human rights, the universal ones. Tommy was a speaker, among others, and once again he roused the audience. I greatly admire his steadfastness despite the authorities’ crackdown on the EDL and its members’ assets. It is a disgrace to our ancestors who died for our freedoms, the freedoms now carelessly thrown under the bus.

Tommy is also known for his antics, which he also displayed while in Brussels. While he was shown around the building, he decided to pay a visit to his favorite MEP, leaving a note on his door. While the prank was cause for laughter, I did have to explain the implications to him and that these pranks were probably not wise for the leader of such a popular movement. He understood the point I made. He may not have a university degree but he has what most graduates lack: street smarts.

The last text message he sent me was from Florence. He was on his way home from a conference, where he’d received the “Oriana Fallaci Award” for his courage (well deserved too). He texted: “I didn’t drink at all. Are you proud of me?”

May God keep you safe.

One thought on “My Friend Tommy”