A lesbian requested a manly haircut at a barbershop in Toronto, but was turned down by the Muslim proprietor on religious grounds. Now she has taken her case to — surprise! — the Ontario Human Rights Commission.

The HRC spokesbeing in this news report says that there is no hierarchy of rights, and no one class of right can trump another. But I think she’s wrong: experience has shown that ethnicity trumps women’s rights, gay rights, and all the others. Since Islam has deliberately and deftly converted itself into a “race”, the rights of Muslims trump everything.

I predict the barbershop scandal will create a paradox that overloads the collective circuitry of feminists and gay rights advocates.

It’s reminiscent of an episode entitled “I, Mudd” in the second season of the original series of Star Trek… 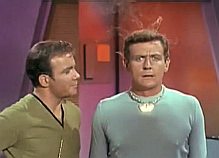 In that episode Captain Kirk and Mr. Spock outwit Norman the android by confronting him with a version of the Liar’s Paradox (also called Epimenides’ Paradox). Norman’s primitive program is unable to evaluate Mr. Spock’s statement. His android brain overloads, short-circuits, and seizes up. Smoke comes out of Norman’s ears, and he is incapacitated.

Will smoke soon be coming out of the feminists’ ears?

If so, will it be visible under their burkas?

5 thoughts on “Lesbians, Muslims, and the Ontario Human Rights Commission”