Last year Geert Wilders was acquitted by an Amsterdam court of inciting hatred and discrimination by his statements and his movie about Islam. This year a young man named Robert de Jonge faces a similar ordeal for what he said about Muslims in an interview.

Below is an article from De Dagelijkse Standaard about what is happening to Robert de Jonge. It was translated by Vederso, with the author’s consent.

The complaint against Robert de Jonge was initially reported on 9/11/2011. The exact content of the lawsuit is not yet known.

This may seem like a publicity stunt, but when you take a closer look at it, not only is this young man on trial, but also Free Speech.

Joost Niemöller is a serious journalist for De Dagelijkse Standaard (The Daily Standard), a large non-MSM news site in The Netherlands. He has done a three-part interview series with Hans Jansen on his book about the Crusades, and much more.

Is the Public Prosecutor (Openbaar Ministerie, OM) beginning to silence criticism of Islam?

Where the conviction of Wilders failed, the Prosecutors now undertake attempt #2.

With a silly sign I stood in the cold to demonstrate on the first day of the trial against Wilders. That was just once, but never again, I had hoped. Demos — they are not my thing. But now the OM attempts to stifle criticism of Islam. This is the case against Robert de Jonge. I have to go out into that cold again. 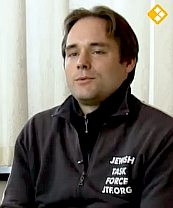 “Who the heck is Robert de Jonge?” you think. “Should I care?” Yes. You should.

Robert de Jonge has to come to court because he was in a Dutch television documentary and said gross things about Muslims. That was two years ago. And a year ago, a young man with a Dutch-Moroccan nationality thought he was hurt. And lodged a complaint. So the prosecution has had a year to spend thinking this over. Bet that they do not want to slip again. And bet that there is still some very old ache.

Yesterday I wrote on the matter at Vlad Tepes Blog.

That article was the first time that the lawsuit came out. And it clearly made little news in the media. “Ah,” my fellow journalists must have thought, “who is that Robert de Jonge anyhow?”

But it is not someone named Robert de Jonge who is on trial here. Here is a basic right. The principle of freedom of expression is on trial. Whether the principle is supposed to be that one remains free of offence and free from ever being offended. For freedom of opinion is nothing, if no form of verbal harassment is allowed to go along with it. The idea behind freedom of speech is precisely that it is sometimes unwelcome. And you sometimes have unwelcome opinions about groups. Fortuyn had seen that the idea of discrimination stands contrary to the freedom of opinion. Therefore Fortuyn also recognized that in actuality it must be possible to say very much. Fortuyn had no problem with an imam comparing him with all kinds of animals and diseases. As long as the knife stays in the bag. For free opinion ends exactly where the violence begins. And thus incitement to violence too.

The principle is: In The Netherlands Theo van Gogh must be able to speak about ‘goatf***ers’. He’s not to be killed like a pig. And he should not even have been threatened.

I am afraid that many do not understand. I also fear that a conviction of Robert de Jonge a very real possibility. For a look back to the ruling in which Wilders was acquitted. The court said:

The legislative history and the case law shows that criticizing a religion and criticizing the behavior of the followers of a particular religion is permitted.

So Wilders was ‘off the hook’. Criticism is okay. Criticism is not giving offence . That’s nice. Furthermore, the judge said in a little puzzling way about Wilders’ statements: “They are not about ‘a group of people’ as defined in Article 137c of the Penal Code as required.” This led to acquittal. Even when Wilders clearly had not spoken about Islam, but about specific people, the judge found that acquittal should follow. There was in fact no connection with Islam specified.

The judge had more of a problem with the next statement by Wilders. But here also acquittal followed:

The next statement is discussed separately: “The demographic composition of the population is the biggest problem in the Netherlands. I’m talking about what is coming to the Netherlands and what it propagates. If you look at the numbers and the developments within… Muslims will move from the big cities to the countryside. We must stop the tsunami of Islamization. That touches us in our hearts, in our identity, our culture. If we do not defend ourselves, all other points in my program turn out to be nothing.”

Concerning this statement, the Court ruled that the words used, although rude and demeaning, were not inflammatory and not incitement to hatred or discrimination. Therefore acquittal followed.

Wilders was an the edge right here:

Then he says, “there is a battle going on and we must defend ourselves.” This has an inciting character. Suspect enters the boundary of the criminal permissible, but in conjunction with the rest of the interview, which emphasizes that suspect has nothing against Muslims but against Islam, there is no question of incitement to hatred. The statement continues not to incite discrimination. Acquittal is therefore the result.

But put that next to the statements of Robert de Jonge, such as this:

“Yes, Islam is a danger to the world. They want to conquer the whole world by … they say it themselves: the wombs of our women we will conquer Europe. So they make … yes, they’re constantly creating jihadis … so more children, more children and more children and more women from the Rif to get here for more childbearing. They just want to make sure they are in the majority, so they … so they can play the boss, and that is a real danger, and, yes, I can see that.”

A judge who acquitted Wilders would here come to a conviction with great ease. Where in one case it was about criticism, here it will be due to the language, will be called deliberately giving offence. Where in one case the link between Islam and Muslims was not established, here this is the case. Where to Wilders it clearly was about Islam and not Muslims, in Robert de Jonge’s case it is otherwise.

Why is such a conviction dangerous? This is dangerous because here the freedom of expression will be limited. The new rule is: Swearing about Muslims in public is not permitted anymore. Theo van Gogh actually should have been sentenced because he spoke of ‘goatf***ers’. In short, Mohammed B. was within his rights. (Although he should have tackled it differently.)

And now it appears that the entire case against Robert de Jonge will be adjudicated in relative silence. I think that’s still the scariest part. Its general importance is overlooked.

See YouTube video for which Robert de Jonge has to stand trial.

This video (from 8th minute, 15th november 2012) features Joost Niemöller, Hans Jansen and Geert Wilders on the new trial. Prof. Jansen has been asked to be a witness in this trial, too.

3 thoughts on “Free Speech on Trial Again in the Netherlands”