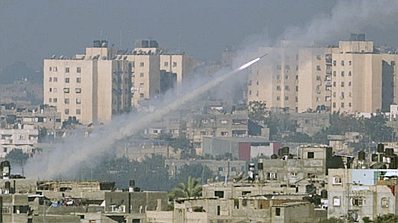 A ceasefire between Hamas and Israel was announced earlier today. It was brokered by the Egyptian foreign minister and Hillary Clinton during the latter’s visit to Cairo.

However, numerous reports say that the rockets are still being fired from Gaza into southern Israel. One such report has just come in from our Israeli correspondent MC, who is in Sderot:

It is 21:15 here and we have just had Sever Adom, don’t know where the missile landed…

I think this ceasefire is a carefully calculated Clinton calamity. but then, I’m cynical.

There was a strong rumour earlier that the IDF was going into Gaza tonight, and that the logistics corps had been mobilised (for a long engagement). I had thought this had been overtaken by events — but maybe not. We shall see in the morning.

I will update if anything else happens, we can hear the drones up there, now two of them at least.

Below are excerpts from an article about the ceasefire from The Jerusalem Post:

Kamal Amr makes formal announcement of truce in joint press conference with Clinton in Cairo; Israel will not lift Gaza blockade; PM tells Obama he’s ready to give cease-fire a chance as rockets continue to fall on South.

Egypt announced on Wednesday that a cease-fire had been reached to end. eight days of fighting between Israel and the Palestinians in the Gaza Strip, starting at 9 p.m.

Egyptian Foreign Minister Mohamed Kamel Amr made the announcement in a joint news conference with US Secretary of State Hillary Clinton.

“These efforts … have resulted in understandings to cease fire and restore calm and halt the bloodshed that the last period has seen,” Amr said.

Israel has agreed to the truce, but will not lift its blockade of Gaza as part of the deal, according to an Israeli official.

Netanyahu told US President Barack Obama on Wednesday he was ready to give a cease-fire with Hamas a chance, his office said in a statement.

“(Netanyahu) spoke a short while ago with President Barack Obama and agreed to his recommendation to give the Egyptian cease-fire proposal a chance, and in this way provide an opportunity to stabilize the situation and calm it before any more forceful action would be necessary,” an Israeli statement said…

2 thoughts on “Ceasefire? What Ceasefire?”