This is the ninth in a series of posts on this week’s OSCE “Human Dimension Implementation” meeting in Warsaw. More will be coming later this week. See the list of links at the bottom of this post for previous articles.

This report was written by Elisabeth Sabaditsch-Wolff. She was part of a team representing the civil liberties organizations ACT! For America, Bürgerbewegung Pax Europa (BPE), the Stresemann Foundation, and the International Civil Liberties Alliance (ICLA).

Below is a photo of the seven team members: 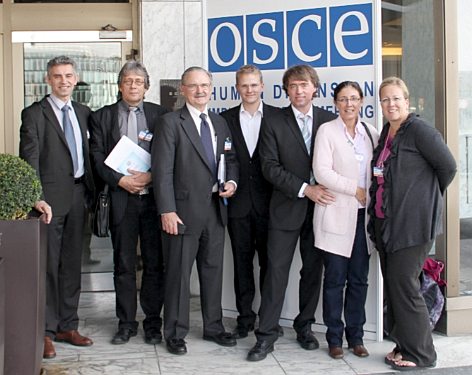 From left to right:

The Battle Has Begun
by Elisabeth Sabaditsch-Wolff

A sizeable delegation of representatives of the Counterjihad are currently attending the OSCE conference, called ‘2012 Human Dimension Implementation Meeting’. In this gathering the status of human rights within the OSCE region is discussed in a plenary comprised of diplomats from participating States (OSCE lingo for member states), representatives from international organizations and, most importantly, representatives from civil society.

Readers should be aware of the high status accorded civil society within the OSCE, a status not granted at any other international organization worldwide. We enjoy total equality with participating States, meaning that we have the right to speak; as a matter of fact, so-called “interventions” are encouraged in the plenary, with the diplomatic delegations holding the exclusive right to reply.

The last time I attended an HDIM meeting was back in 2009, after which I was reported to the authorities in Austria and was tied me up by legal case for the following two years, as most of you know. A delegation from ICLA was present last year.

Here are some observations from yesterday’s all day event concerning “Freedom of thought, conscience, and belief”.

With the U.S. Constitution hanging in the balance and the First Amendment being threatened by the Muslim demand to criminalize “Islamophobia”, it was bizarre to see the U.S. delegation ignore the elephant in the room by being preoccupied by LGBT issues and posing as “Defenders of pluralism”.

Though I abhor using these words, my final thoughts are as follows: The battle has begun. The two sides — defenders of freedom and the lovers of death and submission — are now in direct opposition.

May the forces of human good prevail. Our children deserve no less.

One thought on “OSCE Warsaw: The Battle Has Begun”