A British reader writes to tell us that anti-jihad activists are very close to stopping a planned mosque in the Cricklewood area of North London. He’s asking for help from fellow Britons who share his interest in stopping the mosque.

Below are guidelines for filing an objection to help change the Council Planning Officer’s mind, so that she is more likely to recommend refusal. Otherwise she will simply grant planning permission. The mosque’s opponents need her recommendation for a refusal, because it will go to the Planning Committee in front of the elected councilors.

This is a typical case of a mosque operating unlawfully for years, by stealth. And then when locals complain to the Council and force the mosque to apply for planning permission, the Council would rather to pass it on the Q.T. Mosque outfits often do this: operate without permission for years and then say they should have permission because they have been there for a long time! And local Councils are too gutless to say “no” unless they receive encouragement from their constituents.

The decision is will be made during the next few days. Our correspondent believes that if enough Londoners —especially north Londoners — file objections, then the opponents of the mosque just might be able to swing it. 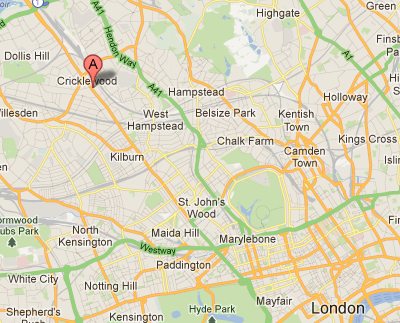 A mosque planning application in Cricklewood will be decided over the next few days. Your action can stop it.

Please email your polite objection to the planning application at: devcon@camden.gov.uk. Please also cc Seonaid.Carr@camden.gov.uk just to be sure.

This is an example of a mosque operating unlawfully for years. And when locals force them to apply for permission, the Council hope to pass it on the quiet.

You need to include your address in the email, or the Council will probably ignore what you say. It will have more impact if that address is not too far from the application.

I am emailing to object to the planning application for the mosque at 78 Cricklewood Broadway.

My objections are as follows:

You can include 1 or 2 of the following 3 points in your email. Please don’t just cut and paste, or this will be another excuse for the Council to ignore you. This is a guide for your objection in your own words:

The mosque site is in a congested shopping and residential area, surrounded by quiet terraced streets, double yellow lines, white zigzags, residents-only parking, and a private alleyway to the rear. This is on the main A5 thoroughfare out of London leading up to the M1. The proposal provides no parking. The Applicants don’t say how many the mosque will attract, nor the opening hours, nor how many will come by car. Just a few cars will create huge traffic problems on this busy road.

The proposal will create unacceptable disturbance, so close to flats and houses all around, and above. Especially on the quiet and densely populated streets to the rear. This mosque will have to operate before sunrise and after sunset, and opening times will prove impossible to enforce during festivals, e.g. the weeks of Ramadan. The Applicants could hardly have chosen a less suitable place.

Cricklewood Broadway is a Neighbourhood Centre under Camden Development Policies. Losing this shop is contrary to Council Policy. Paragraph 10.6 states: “The Council wishes to retain local shops outside centres where possible, including those on small shopping parades.” Policy DP30 “recognises that shopfronts can contribute greatly to the character of centres and their distinctiveness”, and says the Council “will resist the removal of shop windows”. This proposed mosque breaks all these rules. It is unacceptable for the Council to allow Policy to be so openly broken in this way.

There is a history of lack of candour with the Council on this point. They claim to have been “offering services to our community members since 2004”, despite having claimed, in a 2007 planning application, that the property “is used as A1 leased shop and will remain the same”. This was not the case.

2 thoughts on “Calling All Londoners: Stop the Cricklewood Broadway Mosque!”