In his latest essay, Paul Weston examines the mysterious process by which the ardent multiculturalists of the West have become the exponents and enablers of multiculturalism’s greatest enemy. 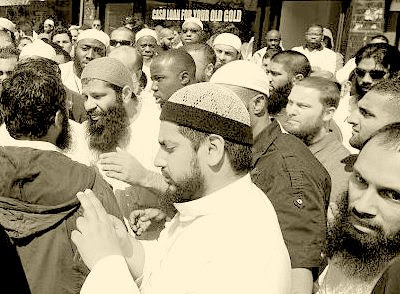 The West is made up of countries built around one basic and incredibly important political ethos — they are all Liberal Democracies. Unfortunately, these countries also share a more recent political ideology which has come to be known as multiculturalism, a word invented in the latter half of the 20th century to enforce our toleration — indeed celebration — of all faiths, cultures and races.

Multiculturalism sits at the pinnacle of Political Correctness (another expression invented in the late 20th century) and is promoted in the post-Christian West with a religious fervour. Multiculturalism trumps all in the PC world. The working class, the homosexual, women in general but particularly so feminist women — all bow before a political and ideological supremacy invented to favour of a foreign race and a foreign religion.

This peculiar attitude has been adopted by our ruling classes who are obsessed with atoning for the perceived sins of historical oppression carried out in the name of Christianity and the colonisation of non-white countries. The West now finds itself in the position where multiculturalism is the driving ideology behind pretty much everything — the law, education, employment and correct thinking. Those who do not think correctly are called racists, the ultimate heretical sin in PC terms.

So where does Islam fit into the liberal/left’s brave new PC world of non-prejudice, non-discrimination, tolerance for the “other” and respect for all races and religions? Is it unreasonable to suggest the core tenets of Islam’s political/religious ideology make it intractably and unarguably impossible for Islam to peacefully adapt to life in multicultural societies?

The answer to this question represents the most important issue of the 21st century. If Islam is capable of living alongside Christians, Jews, Hindus, Sikhs, Buddhists, atheists, feminists, homosexuals, adulterers, beer-drinkers, short-skirted women, admirers of free speech and democracy, and perhaps even Justin Bieber, then the West is capable of living in peace as it has done so for close to the last seventy years.

If, on the other hand, all the above are impossible for Islam to peacefully co-exist alongside, then the multicultural West is heading for the showdown of all showdowns with monocultural Islam. Given the huge demographic growth of Islam within the West and the 1.6 billion Muslims without the West, such a showdown has the potential to cause World War III.

This is why Islam is the most important issue of our times. The liberal/left, with their professed love of multiculturalism and moral relativism, should really be the ones most concerned about the negative aspects of Islam, but they have essentially gone AWOL on the subject. This does not, sadly, come as a surprise. If Islam is indeed a monocultural and supremacist ideology, then the liberal/left would have to stand against it. They would then lose their perceived moral mantle and become “racists”… so they choose to either ignore Islam, or — in the case of the BBC types — to actively excuse it.

The evidence suggesting Islam is monocultural is overwhelming. The history of Islamic conquest and its subsequent physical and ideological supremacy over the defeated people is there for all to see, if they can be bothered to read a history book. The Koran itself is a monocultural and supremacist tome which calls for the death, conversion (reversion) or acceptance of a second-class status for all non-Muslims.

So vehement is the animosity shown by monocultural Islam toward all other cultures and religions that entire geographical regions have been physically broken up. In 1947 the partition of India was a direct result of Islamic monoculturalism, as was the partition only recently of Sudan, albeit after the deaths of close to half a million non-Muslim Africans.

If Muslim women become involved with non-Muslim men then such is the shame of monocultural Islam they must be killed in the name of “honour.” This does not sound particularly multicultural or tolerant to me; does it to you? Left/liberal lovers of multiculturalism should really try dating a Muslim girl in Tower Hamlets or Malmö. Ask her family to join you both for a drink in the pub, better still, her three brothers by themselves….how long do you think you would live? Hopefully not long enough to impregnate her if you really cared for her longevity….

The list of examples affirming the total inability of monocultural Islam to respect and live amongst multicultural non-Muslim societies is far too long to go into here, but one thing is very clear — Islam is as monocultural as monocultural gets, and worse still, is a supremacist ideology to boot.

Which is why we find ourselves in the political nightmare that is the 21st century West. Our foolish insistence that multiculturalism is a positive boon to our countries means one thing and one thing only in the face of a resurgent and monocultural Islam — extinction circa 2050 at the worst, or victory after countless horrors and death at the best.

What a tragic irony this is. The liberal/left will not like life in a monoculturally Islamic West. That they should actively seek to bring about a decidedly illiberal monoculture as a direct and inevitable consequence of their belief in multiculturalism is one of the more baffling aspects as to the workings of the liberal mind.

Perhaps someone such as Nick Lowles, the erstwhile co-ordinator of Hope not Hate, might care to weigh in on the subject? Mr Lowles celebrates Britain’s multicultural society, but surely he cannot argue that Islam is anything other than monocultural? Over to you Nick — how exactly can you reconcile your admiration of multicultural Britain alongside your defence of monocultural Islam?

I doubt Mr Lowles will take up the challenge, not least because logically speaking he is simply unable to. The fact is, the Lowleses of this world don’t actually care one jot about multiculturalism .What they really care about is utilising mass immigration and monocultural Islam as the twin siege guns of revolutionary warfare. Lowles naïvely believes that from the shattered countries and societies monocultural Islam must inevitably bring about will rise a new Socialist/Communist world order.

I’m not sure that such people fully recognise what they are unleashing. The Communist Iranian backers of Ayatollah Khomeini against the Shah of Iran only realised what they had done when they were sentenced to death, but it certainly explains the otherwise inexplicable support of hard-left multiculturalists for the all too obviously inassimilable, dangerous and supremacist monoculture that is Islam.