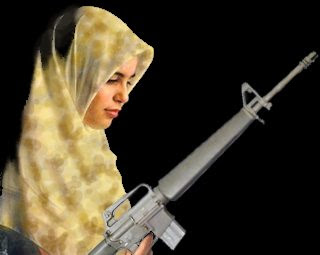 The Norwegian government has decided to allow soldiers to wear hijab as part of their official uniform. The directive was made all-inclusive by permitting the turban and yarmulke as well, but the move is a blatant attempt to pander to the Islamic grievance lobby.

Our Norwegian correspondent The Observer has translated a brief article from today’s Dagbladeton the topic. The translator includes this note:

It seems that the Muslim community in Norway has managed to coax the authorities into granting them yet another special concession. This time it’s the option for female Muslim soldiers to wear the hijab if they wish to do so.

My guess is that several prominent Islamic figures in Norway will now silently ‘encourage’ female Muslims to join the armed forces of so that they can really take advantage of this Islamic victory and rub it in our faces.

Turban, hijab and kippah can now be worn with Norwegian military uniforms

The defence ministry has given the heads up for the new directive which allows certain symbols to be worn in conjunction with the military uniform, the regional newspaper Stavanger Aftenblad reports.

“The decision to allow religious symbols to be worn with military uniforms was approved on July 1,” says Major Tor Simen Olberg, the advisor for ‘Feltprosten’ who is responsible for the department of military chaplains.

Among the newly approved symbols are turbans which may be worn by Sikh soldiers. For soldiers belonging to the mosaiske trossamfunn, namely Jews, it is now permissible to wear a kippah or alternatively a smaller round cap on the head. This garment can also be worn underneath the standard military beret.

Female Muslim soldiers now have the option to wear the hijab if they wish to do so.

“It is required that those women who chose to wear the hijab wrap it tightly around their heads. It cannot be fitted loosely or be allowed to flap around,” according to Major Olberg.

He emphasizes that the list of approved symbols is a short one. In addition to the aforementioned symbols soldiers are also allowed to wear bracelets with engraved or affixed religious symbols.

Major Olberg announced the new rules on symbols during a seminar on religion and conflicts which was held at NATO’s Joint Warfare Centre at Jåttå in Stavanger earlier this week.

12 thoughts on “Soldiers in Hijab”