The following article and its accompanying video are the first in a series by our Russian correspondent Russkiy.

Russkiy, who understands Arabic, has been studying material by “reform Muslims” on the internet. His first article and translation concern Ahmad al Qabbanchi, a Shia mullah from Iraq whose ideas must surely be considered blasphemous by many of his fellow Muslims.

As a matter of interest, you’ll notice that Mr. Qabbanchi’s description of “Liberal Islam” aligns perfectly with the Brussels Process. It’s part of a worldwide convergence on ideals and principles that all liberty-loving people can agree on.

Counter Currents in the Arab and Islamic World
by Russkiy

Ever since Robert Spencer at Jihad Watch accused all Islamic leaders and most of the Muslim community of speaking double talk in the aftermath of the 9/11 terrorist attacks — that is, saying one thing to Westerners, assuring them that apparent problems in the Islamic World are nothing other than outdated cultural practices which have no direct connection to Islam as well as reactions to western imperialism and, whilst at the same time urging their supporters to take up arms against the infidels in the name of Allah — I became interested in confirming for myself the truth of this accusation.

In the ten years that followed 9/11 I taught myself Arabic and started following Middle Eastern media. The fact of the matter is that the majority of Islamic leaders and Muslim community are indeed adversarially predisposed towards non-Muslims in general, and the West in particular. However, the purpose of this post and the ones to follow is not to discuss this issue, to which enough attention has been paid, but rather to show the opposing views and currents in the Arab world to this adversarial attitude.

The motivation for my writing this is that I became aware of the anti-Islamic activity going on inside of the Arab world. MEMRI doesn’t seem to be paying much attention to this current, which I believe to be of the utmost importance to the Counterjihad movement in the West, as it validates our understanding of what is happening. Potentially, if these currents manage to gain momentum, they will bring down from the inside the construct that is Islam. 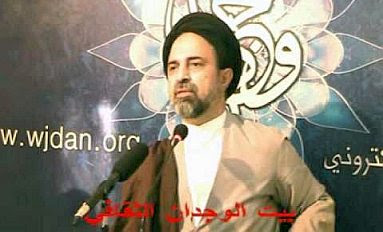 The first personality I would like to discuss is Ahmad al Qabbanchi. I found it fascinating to see a “mullah”, as can be seen from this photo of him, acknowledge all the problems that critics of Islam bring up — and then add more.

Some of the things he believes:

One may ask: Is this guy for real? Would anyone listen to him?

What he is saying is completely opposed to the mainstream Islam that we know today. I would say that some people do listen to him, as one of the videos, which depicts him giving a lecture on Liberal Islam to the Amir of Abu Dhabi and his court, testifies. Of course, he doesn’t go as far as saying that the Quran is not the word of God in that lecture; however, he asserts that the basic principles of human rights should be higher in status than the Quran and Sunna.

I have translated a part of an interview with him in which he begins to explain his position. In the coming week I will provide a translation for the remaining parts of the interview, where he explains his views in greater detail.

Many thanks to Vlad Tepes for subtitling and uploading this video:

7 thoughts on “Counter Currents in the Arab and Islamic World”