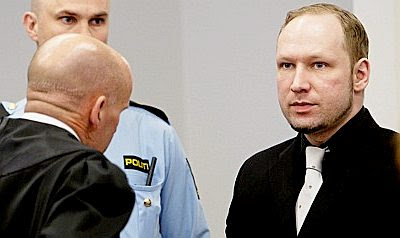 The Norwegian government has released a preliminary estimate of the cost of keeping mass murderer Anders Behring Breivik safe inside his lounge, spa, gym, and games room. Needless to say, his incarceration will be a very expensive proposition, regardless of the final judgment on his sanity.

Our Norwegian correspondent The Observer sends his translation of an article on the topic, and includes this note:

I’m not quite sure about the exchange rate at the moment, but needless to say, we’re talking about several thousand U.S. dollars a day.

Surely there must be better ways to spend Norwegian tax money…

And the translated article from Dagbladet:

The new hospital wing in Ila prison where Anders Breivik Behring will be looked after requires at least twenty employees, and will cost approximately NoK 30,000 a day.

According to VG, this price only covers the cost of the security personnel. Annual costs are expected to reach nearly NoK 11 million.

“It has to be sufficiently staffed in order to protect the patient, the staff and the safety of the society,” says Robin Kåss (Labour), member of the Ministry of Health.

According to Kåss the cost of employing staff on a 24/7 basis is significant, but he is unable to come up with a concrete figure.

On Wednesday it was announced that the Ministry of Health has approved the construction of a new hospital wing at Ila prison, where Anders Behring Breivik will be incarcerated if he is declared insane.

Which means that Breivik will stay at Ila regardless whether or not he is declared sane by the Oslo City Court. The wing will have a high security level, and it will be separated from the rest of the prison, but lie within the perimeter of Ila, according to an article published in Aftenposten on Wednesday.

5 thoughts on “The Cost of Incarcerating Breivik”