Stephen Yaxley-Lennon, a.k.a. Tommy Robinson, is the joint vice-chairman of the British Freedom Party. The following article, which appeared earlier today at the British Freedom website, describes some of the ongoing official harassment that Mr. Lennon is forced to endure virtually every day. 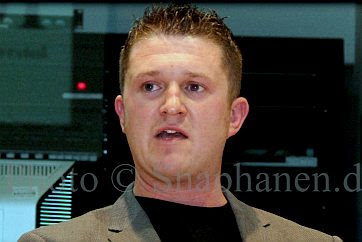 Following British Freedom’s recent public meeting in Yeovil, party co-Vice Chairman Stephen Lennon was arrested by police for entering a kebab shop. He recounted the sequence of events in his speech at the European Parliament:

[I] came out of the meeting, I was walking, police officer pulled up. “I’m arresting you on suspicion of drunk and disorderly.”

“I’m not drunk. Okay? You can’t arrest me for drunk and disorderly.”

We get down to the police station, I start my breathalyser. I’m not drunk. Eleven o’clock in the morning, the next day comes, they then rearrest me on suspicion of racially-aggravated public order. I’m held for another twelve hours. I said, “Why are you arresting me?”

“Well, what happened in there?”

“Nothing happened in there.”

“Well, we need to investigate whether something happened in there.”

I said, “So no one’s actually telling you something happened”.

They held me for twelve hours until they could contact the kebab shop owner to see if I’d done anything…. I spent twenty-four hours in the cells. I’m then released.

Maliciously entering a kebab shop? It sounds absurd, but it’s no joking matter when a citizen can be arrested and imprisoned simply for going into a take-away restaurant to greet a friend.

Unfortunately, Stephen routinely has to endure official harassment and intimidation that would break most men. In the last couple of years he has:

As a catalogue of harassment and intimidation by politically motivated police, all this wouldn’t look out of place in a Stasi interrogator’s log book. But it’s happening here, in supposedly democratic Britain, in 2012.

Its purpose, of course, is to silence political dissent on the issue of Islamic extremism. Too afraid to deal with the problem itself (for the violent Muslim backlash it might bring) officialdom instead turns its wrath and frustration on the messenger, one who sees clearer than most the danger our society is in.

There is one sure-fire way to stop these abuses, and that is for others to follow Stephen’s courageous example, to get up and speak the truth, whenever and wherever they can. The state can bully one man, or ten, or a hundred, but it cannot bully hundreds of thousands into silence. To quote again from Stephen’s Brussels speech, “… the next generation… will never forgive us if we stand by and do nothing”.

11 thoughts on “Political Imprisonment in Britain, 2012”