The following article about the Brussels Conference was published recently in the print addition of the German newspaper Junge Freiheit. As far as I am aware, no online version of the piece has been posted.

Many thanks to our Swedish correspondent LN for the translation, and for the scanned image of Junge Freiheit. The links in the article were added by me:

The Islam-Critics Conference: experts warn of impending restrictions on freedom of expression 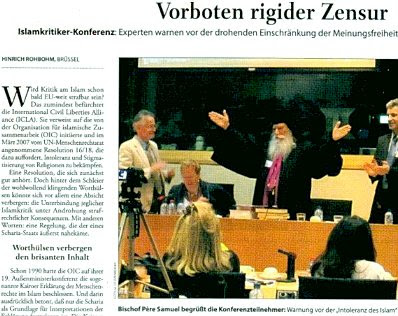 Will criticism of Islam soon be a criminal offense across the EU? This is at least what the International Civil Liberties Alliance (ICLA) fears: It refers to the resolution 16/18 which was initiated by the Organisation for Islamic Cooperation (OIC) and was adopted by the UN Human Rights Council in March 2007, calling for a fight against intolerance and the stigmatization of religions.

A resolution that at first sounds good. But behind the veil of the benevolent-sounding verbiage a special purpose could be hidden: to prevent any criticism of Islam under threat of criminal punishment. In other words, a regulation which would be close to the jurisdiction of the Shariah state.

Back in 1990, at its 19th Conference of Foreign Ministers, the OIC had specified and decided the so-called ‘Cairo Declaration of Human Rights in Islam’. And in it explicitly emphasized that only the Shariah is set as the basis for interpretation of the statement. The Cairo Declaration shall apply to the 57 OIC member states as a guideline in the field of human rights. The only question is, how seriously do the OIC-member-states then take the ‘UN Declaration of Human Rights’ of 1948?

Since UN resolutions for states, however, have little more than an advisory character, the OIC now obviously want to reload. Their goal: EU-wide legislation, making it possible to prosecute anti-Islamic media coverage as well as Islam-critical studies.

The EU has allegedly offered the OIC to serve as host this summer for the so-called Istanbul Process, which is to advance these efforts. Back in December of last year, the U.S. government under Barack Obama agreed to act as host for an OIC conference. Thus, with regard to the absence of political legitimacy for its unreasonable demands, the organization received a substantial revaluation of its reputation.

That the same thing in Europe also is also expected by the OIC is suggested by a report from the ‘International Islamic News Agency’ (Jina) after managers in the Department for Cultural Affairs of the OIC argued that a range of hosts in the EU was considered as a “highly promising approach to solving the problem”.

Islam-critics are alarmed, fearing that an OIC conference in Brussels would prompt new Europe-wide legislation criminalizing all criticism [of Islam]. In the past week therefore only the resistance to the efforts of OIC were formed. As part of an event hosted by the ICLA international conference on freedom of speech and human rights in the European parliament in Brussels, a counterpoint to the Istanbul process, a Brussels Declaration was adopted.

The initiators are well-known critics of Islam such as the Belgian MEP Philip Claeys, the author Sabatina James, who converted to Christianity [from Islam], the French author Nidra Poller, the Canadian journalist Mark Steyn and Bishop ‘Pére Samuel’ of the Syrian Catholic Church.

The latter warned of the “intolerance of Islam”. And of the fact that Muslims by way of the “taqiyya” if needed were allowed to hide their faith. Nidra Poller pointed out that on France’s part you could discern symptoms of an ongoing war. “It is a war that does not look like war and therefore is not perceived by ordinary people as a war,” she said at the congress. Although experts are well aware of the development. In conversations with neighbors and friends, a great lack of understanding is exhibited.

The West is “pretty stupid” in the face of the OIC’s plans, says the French political scientist Alexandre del Valle, who spoke of how Islam in Europe uses the accusation of fascism as a “powerful tool” to destroy the West. The European Left might rejoice in the Arab spring. “It brings them the Shariah.”

In the Brussels Declaration the Islam-critics demand that the political leaders of all nations explicitly distance themselves from invitations and events organized by supporters of the Cairo Declaration.

Previous posts about the Brussels Process: