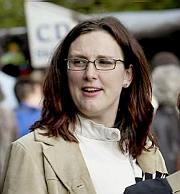 Part of Ms. Malmström’s job is to oversee immigration policy for the European Union. Like most functionaries in the upper reaches of the EU bureaucracy, she favors the cultural enrichment of Europe through mass Third-World immigration. She and other unelected Eurocrats in Brussels decide how much and what kind of immigration is best for the EU, and then impose their diktats on the member states.

As mentioned here the other day, Geert Wilders and his PVV party are running for election in the Netherlands on a platform calling for Dutch withdrawal from the European Union. Today Mr. Wilders wrote an open letter in Swedish to Cecilia Malmström about the interference by the European Commission in what properly should be the Netherlands’ internal affairs.

Many thanks to Ted Ekeroth for the translation:

The ties between the Netherlands and Sweden go way back. For centuries we traded cereal crops with each other, Dutchmen helped establish Göteborg, and older Dutchmen remember, with warm feelings, “the white bread” from Sweden that marked the end of the long, dark “hunger winter” of 1944-1945 in Holland.

Up until now, we haven’t had any reason to look at Sweden in any other way than with appreciation.

And yet it seems that we now have to view this beautiful country with different eyes. You want EU-domination where others want freedom. Not one single Dutchmen has voted for you. We don’t know who you are. We don’t know you, but you force your ideas on our people.

Your interview with [the French newspaper] Le Monde shows that you brand people who are critical of mass immigration and Islam as xenophobic and populists. That is apparently what you think about large parts of the Dutch population. You also have high regard for the “world of academia”. Let me make the point that these highly educated people do not represent anyone other than themselves.

I urge you not to confuse your naïve multicultural dream with reality. Maybe you should become acquainted with what mass immigration means to millions of Dutchmen: more criminality, welfare dependency, alienation, problems in education, etc.

Maybe it would be a good idea for you to move to an Islamized area. Not for a brief visit of a few hours, after which you get picked up by a chauffeured car, but permanently. Islamized areas such as Kanaleneiland (Utrecht), Transvalal (The Hague) or Rotterdam-South would be excellent for this purpose. Can we assist in finding you an apartment? We will gladly help with that. You speak of “cultural enrichment”? You shouldn’t deny that to yourself any longer.

The dominance of the EU is in contradiction to our ancient struggle for freedom and independence. De Partij voor de Vrijheid, the Party for Freedom, thinks that the people of the Netherlands must be able to decide about their own borders and their own immigration policy. We are suffering from your absurd refusal to allow us to make even the slightest limitation of policies for entering our country. You don’t even want to limit the number of partners that one is allowed to bring into the Netherlands!

Your involvement does not fit in with the freedom and independence of the Dutch. Therefore, we urge you to cease these activities and resign! That would make the time that the Netherlands still need to free itself from the European Union somewhat more bearable.

An answer would be appreciated.

33 thoughts on “Geert Wilders: An Open Letter to Cecilia Malmström”