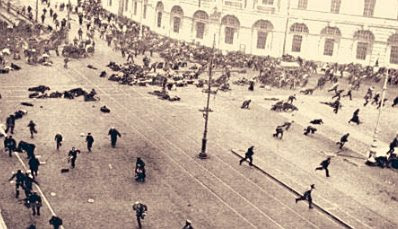 Gates of Vienna does not advocate violence as a solution to the problem of Islamization.

Dymphna and I take have taken that position not just to avoid being shut down by Blogger or investigated by the Department of Homeland Security — although such considerations obviously play a role in our strategic thinking — but also because we believe that violence will not provide the most effective solution to the problem.

Violence may indeed come, despite our aversion to it. But we will continue to strive for a non-violent resolution through public debate and the ballot box.

We may well be pursuing a chimera, but we will persist.

When I was in school in England back in the 1960s, one of our teachers was a man who had lived in Germany during the interwar period. He was adamant in his belief that no one who had lived through an extended time of civil unrest would ever wish for such a thing to happen.

Those who argue for violence are in effect hoping for a breakdown of civil order. Germany during the period 1918-1923 — from the Armistice through the Treaty of Versailles to the Inflation — provides an instructive example.

The Freikorps — disillusioned nationalists who had been armed by the war, and then deprived of their monarch — took to the streets to do battle with the Communists. During the same period Anton Drexler founded the Deutsche Arbeiterpartei, later the Nationalsozialistische Deutsche Arbeiterpartei (National Socialist German Workers Party, NSDAP) to oppose the international socialism of the Communists. The streets of Berlin ran red with blood nearly every night.

And we all know how that one turned out.

The rule of law is a precious thing, not to be lightly discarded. Yes, I realize that our treasonous leaders on both sides of the Atlantic are dismantling the rule of law even as I write these words. But its total disappearance — warring militias, armed thuggery, heaps of bodies in the streets — is not an alternative to be desired.

I bring all this up because of an email we received earlier today. A reader from outside the UK watched Tommy Robinson’s speech, and was prompted to write to us. He said, “Would you please relay this to Tommy Robinson. I think you would not publish this on your site, but I think he should read it.”

I’ve forwarded his message to Tommy, but I’m also willing to post it here. We allow a variety of opinions at Gates of Vienna, even if we don’t agree with all of them:

I saw Tommy Robinson’s speech. Mr Robinson is wondering why he is harassed?

It’s simple. One Question will reveal it:

What happens if the police move against…

Sooner or later you have to fight for your rights. You pay in blood or lose them.

The antifascists and Muslims are willing to die and kill for their opinion. Therefore the police dare not touch them.

They (police) want to live and spend their money. They don’t believe in England any longer. Replace democracy in Britain with fascism, Islamism or whatever. As long as they have shiny uniforms and some cash they don’t care.

And as long as you are not willing to do the same (kill and die for your cause), don’t scream like a baby if they harass you.

Nice greetings from a Cassandra (= I tell the truth, but nobody believes me).

Our emailer may be quite right. We may eventually face the grim choice he describes.

And, when that time arrives, I hope to remember Jesus’ words:

Until then, however, I will strive to shore up what remains of the rule of law. If we are ever so unfortunate as to lose it, we shall regret its passing.

As Gavin Boby advised us in his speech in Brussels, in the bad years to come, we should hold the line on the law:

“If you try to short-circuit the law through disorder, you will regret it.

“One day, the law will be applied even-handedly.”

30 thoughts on “A Street-Fighting Man?”