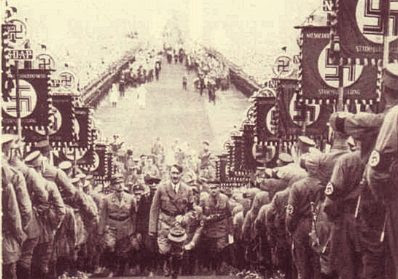 The twilight world of Western Civilization in the early 21st century is often compared with the lambent autumnal glow of Weimar Germany in the late 1920s and early 1930s. M. Sattler, writing in Politically Incorrect, examines the analogy in some detail as it is being played out today in Germany itself.

Many thanks to K. from Germany for the translation:

Of course the empowerment acts of 1933 and 2009-2012 are not directly comparable. In 1933 the Weimar parliament transferred its power on a single day, the 23rd of March, to the NSDAP. Today we witness the formation of a dictatorship in slow motion. The Bundestag transfers power speedily, yet step by step to the EUSSR, without receiving democratic compensation or even asking for any. The EU “parliament” remains as powerless as ever, despite ESM [the European Stability Mechanism, commonly known as the “Eurozone bailout fund”] and other EU mechanisms of authority. And, without question, the character traits of the NSDAP and EUSSR dictatorships are vastly different. Comparable, however, are the democratic processes of abdication themselves: The willingness to relinquish democratic power in the Bundestag nowadays is at a similar level to what it was in the Reichstag of 1933, perhaps even higher, because the empowerment act of 1933 received only about 70% approval, while the empowerment acts toward the EUSSR are regularly approved by over 90%. The general set-ups are also comparable: Both self-disempowerments fall within a phase of utmost economic complexity and seemingly “unresolvable” challenges. At the beginning of the year 1933, Germany was still — despite incipient economic recovery — massively affected by the consequences of the financial crisis of 1929-1932. Likewise today: The Great Merkelian Coup of 2009-2012 is happening alongside a financial crisis and its effects on the overall economic situation. And as Hitler did back in 1933, today Merkel, as a representative of Brussels, argues in her promotion of more dictatorship that there is an “absence of alternatives” in the situation: Only a strongman liberated of the annoying bickering of democratic parties, specifically only a strong centralist executive authority in Brussels without democratic shackles, would be capable of getting a grip on these unprecedentedly difficult realities. That the executive prefers to reign without a legislative check lies in the nature of power. Therefore both Hitler’s and Merkel’s arguments, from their perspectives as representatives of the executive branch, are completely understandable. But why did the legislature in 1933, just as is occurring today, so willingly accede to the establishment of dictatorship? Why did it, in 1933 as today, betray its own vested authority?

This question touches on the core weakness of representative democracy, a system in which the delegates are assigned the role of an intermediary. They themselves are not the sovereign, that is, the people, but only its representatives. The typical problem of a representative, the so-called “principal agent problem”, is therefore also the problem of representative democracy: The interests of the representative are different from the interests of the constituent. The interest of the sovereign as constituent lies, for example, in a free and democratic country, inner peace, security, a stable currency and good schools for children. The interest of the representative may be something quite different: A high and regular income to pay off his mortgage, a posh office, the five-star comfort of his “business trips”. In the theory of democracy, there are not actually any complaints about this conflict of interest: Theoretically, the representative should bestir himself in an exemplary manner to represent the interests of his client, because he only gets reelected if the client is satisfied, and only then can he continue to pursue his own interests (income, office, etc.). In practice however, every Bundestag delegate knows only too well that even after making his best efforts to benefit his constituents, he may lose reelection, because on the ground, the sovereign’s vote depends on viewpoints which are entirely unconnected with the performance of the individual representative, and which are also quite emotional. The sovereign, for example, votes against Stoiber and for Schröder only because the latter looks better on TV, or votes for The Greens instead of SPD simply because right before elections the “Bild” newspaper publishes allegations that the SPD chairman was an gambling addict. Thus the representative can only indirectly influence his chances for reelection through good, competent work. Upon recognizing this dilemma, elections become an immeasurable risk for him, which he seeks to mitigate. He will attempt to secure his reelection in a manner also independent from the sovereign, a goal that can be reached in two ways:

He unconditionally follows the requirements of his party and fraction leaders, and thus cuts a deal with the party: obedience in return for a secure place on the list. This strategy functions as long as the party leader generates secure places (for example, because he looks good on TV or isn’t a gambler).

He follows the executive authority on its natural path toward dictatorship, and thus ultimately uncouples his own interests from the interests of the constituent/sovereign. The first way to security, the basic willingness of the representative to barter (obedience for income), is currently exploited ruthlessly by Merkel in her double function as chairwoman of the executive and simultaneously as chairwoman of the party: Deviators from the government’s opinion are threatened with the termination of their career in parliament. This tragic deficit in the separation of powers between executive and legislative, that common birth defect of the twin states, the Weimar Republic and the Federal Republic, comes back with vengeance today just as occurred in March 1933 upon passage of the Weimar empowerment act. The second way results from the natural desire of the representative to optimize his efforts: While under the reality of life under democracy his work for the benefit of the sovereign is likely not going to be rewarded anyway, in a dictatorship he can much more efficiently direct his efforts to target his own interests. Since in a dictatorship his further fortune depends on his personal network even more than in a democracy, in which the people have at least some degree of influence, the group of people he has to canvass regarding his own interests is more manageable. Or, stated more simply: In a dictatorship he has more time to develop his network and chum up with the party leader in order to secure his place on the list against rivals within the party, and does not have to go through time-consuming nursery school visits only to have his photo seen in the newspaper by some people who might vote for him (but perhaps won’t anyhow). Thus in a dictatorship he can influence his fate much more directly than he could in the practice of representative democracy. In this case, it is true: The greater degree of dictatorship and the fewer elections within this dictatorship, that is, the less influence from unknown and unpredictable groups of persons (voters) outside of the system, the more immediate his influence.

Even after today’s transfer of power to the Brussels dictatorship, it is highly unlikely that the Bundestag will vanish. All dictatorships from Caesar to Stalin to Hussein always maintained a show parliament of handsomely paid, obliging claqueurs. The Roman senate survived the Roman democracy by 400 years without any participatory rights. In the national assembly of the French revolution the deputies continued to give great speeches under Napoleon and Robespierre, as if they really had a say in anything. Also the Bundestag will outlast Merkel’s coup d’état to dupe the Germans for many years to come with an illusory democracy, in which they are permitted to elect the sorts of “parties” that bow to the dictatorship of EUSSR bureaucrats in unison. This future Bundestag, however, a merely cosmetic illusory legislative, will no longer exercise actual, significant legislative functions. But as a delegate in the post-Merkelian Bundestag, one will be able to sit in a posh office just like today, can pay off the mortgage for one’s dacha just the same, and can stay at exactly the same five-star hotel on one’s “business trips”. All representatives, regardless of their party membership, can rely upon this security. And because of this assurance, they all pull together.

The dramaturgy of external circumstances thus worked in 1933 as well as in 2009-2012 only as accelerating catalyst for a process smouldering anyway because of its being immanent in the system. The escape of the representatives into dictatorship was in both cases not at all an escape from the overwhelming challenges of an exceedingly difficult situation. Far more than that it was, then as now, a welcome opportunity for an escape from the voters and their unpredictability. The delegates in the Reichstag 1933 well and truly miscalculated. For all those who in today’s Bundestag speak in favour of the omnipotence of Brussels, this fate of their Weimar colleagues should be a serious forewarning.

2 thoughts on “Slouching Towards Weimar”