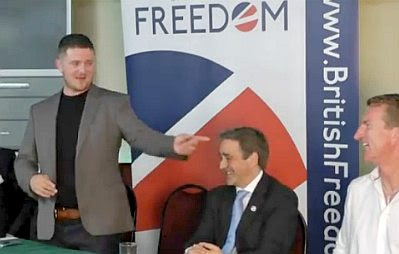 On Thursday July 21 local members of the British Freedom Party gathered in Somerset to greet their chairman, Paul Weston, and two new members of the Executive Committee, Tommy Robinson and Kevin Carroll.

Here’s a report on the event from the British Freedom website:

On Thursday night British Freedom held its first regional meeting in Somerset, chaired by the Local Party Organiser Hamilton Chant. The meeting was extremely positive and well attended by 80+ British Freedom and EDL members, most of whom were from the South West region.

Stephen and Kevin both spoke about the advantages British Freedom can bring to the EDL, whilst Paul outlined the violent thousand-year Jihad Islam has waged against Europe.

Videos of the speakers can be viewed below — please share them far and wide and help us to spread the good word of Freedom.

I’ll do just as BF suggests. Many thanks to Vlad Tepes for uploading these videos and improving the audio.

5 thoughts on “A Political Voice Box… For the Facts”