Our German translator JLH has prepared an explanatory summary of a lengthy photo essay at the Die Freiheit website. 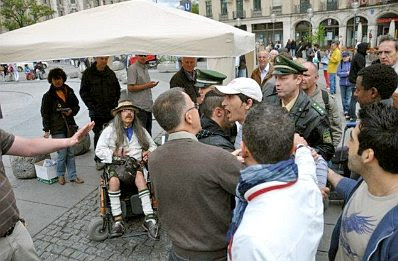 This is a summary and recommendation to visit a photo essay at the site of Die Freiheit (Freedom), the new German political party.

First, some background on the party and its brief history is appropriate. I will do my best here to piece together what I have learned over the past couple of years. If there are mistakes, they are results of my own misinterpretation of what I have read.

I first noticed René Stadtkewitz when he was a CDU representative in Berlin. He had spent much time and energy fighting against the building of a mosque in his electoral district. Once, while he and his family were out of town, his house was fire-bombed. The reason for his appearance in the news item where I first saw his name was that he had arranged a seminar meeting on the subject of Islam. His direct superior in Berlin and another functionary of the party forbade the event and he threatened to exit the party. They backed off.

Somewhat later he invited Geert Wilders to speak in Germany, and again he was forbidden, because the CDU did not want to be seen consorting with an Enemy of European Civilization. He did not obey and was drummed out of the party, so he and a faithful colleague founded Die Freiheit on the model of Wilders’ PVV.

They had intended to start small, only contesting a few seats in Berlin, but there was a clamor across the Federal Republic, and they allowed a number of local branches. This influx of new blood (caution — this is my interpretation of what I have read) caused a broadening of the executive officers and a behind-the-scenes power struggle.

As I interpret it, there was a group in favor of moderating the party’s public positions — as LBJ liked to say: “Let us reason together.” And there was a party in favor of forthright (if not downright blunt) confrontation of the dangers of Islamism, sharia, etc. The hard-liners won, and the soft-liners made a public statement when they exited. In the Berlin elections that quickly followed this public break-up the party did not do well, while semi-wacky groups like the Pirates surged and elsewhere the Reds and Greens were on the rise.

The background of the photo essay is the proposal to build a European Islamic Center on the Stachus — the quintessential, historic downtown area of Munich. Die Freiheit — which is also recruiting vigorously — has mounted a campaign to get some or all of the necessary 30,000 petition signatures to force a referendum against the center. This event on the Stachus was the fifth of these efforts. The narrator of the photo essay and the organizer of the event appears to be Michael Stürzenberger, who is a member of the party executive, the keeper of the web page and a staff writer for PI. He is visibly one of those who believe in “telling it like it is.”

While there are other photos of interest, the three offered here are emblematic of the theme. Unlike the violence in NRW in reaction to a demonstration against a proposed mosque, this event went off peacefully, apparently due at least in part to the visible and energetic police presence.

The first photo [at the top of this essay] shows an enraged Muslim women shouting in the face of an ethnic Serb who is a German citizen. The picture speaks for itself, but there is also commentary. The Serb had been telling of Muslim attacks on Serbs in then-Yugoslavia, and the Afghani woman shouted; “Good for them, you Christian slut!”

Stürzenberger notes parenthetically that a few weeks previously a Muslim women who was, to all appearances, well integrated, had said: “You s***-Germans! When we are in power we will string you all up!” 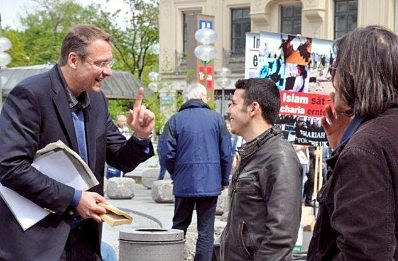 The next photo is the last of three photos showing Stürzenberger in an exceptionally civil discussion with a young Muslim, who tried to deny some of the truths about the Koran by claiming false translations and the like. As Stürzenberger puts it, without using the term, taqiyya: In the end, this Muslim himself had to laugh about his attempts at deception. This confrontation — apparently an exception to the rule of shouting and abuse — is reminiscent of two refugees from the old USSR confronting and quasi-convincing a young Occupier of the errors of his thinking (see Tundra Tabloids). 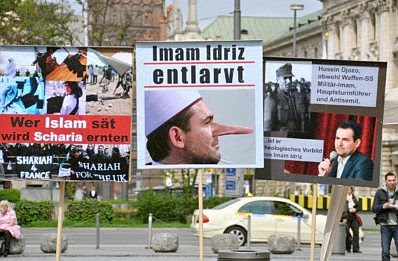 The final photo features posters against Imam Idriz, who is the lead figure in the proposal to build the center. Idriz is seen in the central poster, supplied with a Pinocchio-nose to suggest his taqiyya, and the caption “Imam Idriz exposed.” The poster to the right shows Hussein Djozo, who is described as a captain of the Waffen-SS, a military imam, and an anti-Semite, but still the theological role model for Imam Idriz. To the left is a poster that says: Whoever sows Islam will harvest sharia.

See the original photo essay for the rest of the images.

4 thoughts on “Whoever Sows Islam Will Harvest Sharia”