The European Court of Justice has overruled a series of Austrian restrictions on “family reunifications” as they apply to Turkish residents in Austria, essentially opening the floodgates to waves of new Turkish immigrants, without the Austrian government having any say in the matter.

Many thanks to JLH for translating this article from SOS-Österreich:

EU Verdict: the Turks Are Coming!

According to the EuGH (European Court of Justice), virtually every Turkish or Anatolian sheep-herder with any relatives in Austria (regardless of whether Austrian or Turkish citizen) can settle in Austria. This onslaught will certainly not mean an enrichment of our work force, since, as is known, these Turks will no longer need to be able to speak German. From that, we can conclude that this expected follow-on move will have to be absorbed by Austria’s social services.

It’s about immigrants from Turkey living in Austria who want to bring family members here. Because of supreme court decisions, the various tightenings in immigration law since the middle 1990s do not apply to them. The background is an EU-Turkey agreement that was in existence before Austria joined the EU. Foreigner rights lawyer Helmut Blum, who brought a case to the European Court of Justice: “You could say that the legal situation in 1995 is the standard.”

In principle, it is about a prohibition of deterioration (“reformatio in peius” — a ban on making things worse) for close family members who intend to work in Austria. Much of what policy dictated in terms of obstacles to immigration and restrictions on integration is obsolete. More or less: German before immigrating, minimum age of 21 for a spouse, as well as the agreement to integrate which requires certification of German knowledge for extension of residence. The last amendment took effect in July, 2011.

Recently, in a circular, the interior ministry informed immigration authorities to which persons the exceptions applied. From this emerges that not only Turkish relatives of Austrians will be affected — as originally assumed — but also spouses (as well as registered partners) and their children who want to join a Turkish citizen who is living here.

In fact. knowledge of the decisions is getting around. Turkish media have also reported on them. “We are getting a lot of calls about it. People want to know how things stand — especially with regard to knowledge of German and the minimum age of the marriage partner, before they can come,” says Veli Cayci of the Counseling Center in Vienna.

The country’s largest immigration authority — magistracy division 35 — has for weeks been recording a rising number of inquiries on the new situation. MA 35 head Beatrix Hornschall believes that substantially more provisions no longer apply than the interior ministry assumes in its circular. Hornschall: “We believe that the whole legal situation of the right to settle and the right to sojourn was invalidated.”

To Hornschall, the law, for the application of which there is an almost 300-page compendium to offer guidance to responsible officials, is overdue for reform. “It is no longer the case that that someone who is coming to Austria knows from reading the law what is in force. That is legally very worrying. Distribution of information is becoming increasingly difficult.”

The interior ministry cannot say how many people will make use of the more favorable provisions and whether more Turkish immigrants will be coming. Minister Johanna Miki-Leitner has not yet spoken publicly about the altered legal situation. 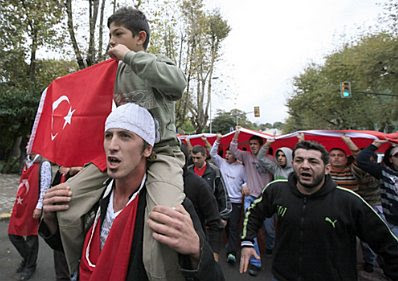 An extraordinary dilemma! Our government is silent, and meanwhile countless Turkish uncles, aunts, cousins and grandparents are packing their bags.

As a lone voice, the FPÖ several times demanded that the association agreement with Turkey be announced immediately. From the SP and VP, not a peep! The Turks can celebrate — their victory is assured.

4 thoughts on “The Turks Are Coming!”