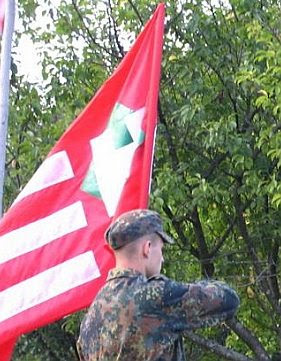 The EDL is often referred to as a “neo-fascist” organization. The members of Pro-NRW are called “Neo-Nazis”. Tea Party people are “Nazis”.

Just about any right-of-center party or organization that criticizes mass immigration is seen as “Nazi” or “fascist” by the Progressive bien-pensants who control public discourse in the West.

And not just the Left, but also conservatives of the more timid variety show a dismaying tendency to fling “fascist” at anyone on their side of the fence who dares to discuss race or ethnicity using anything but the most politically correct shibboleths.

So, just to clear away some of the fog, let’s take a look at some real fascists. These Hungarian fellows give the fascist salute. They rail against “international Jewry”. They even refer to themselves as “national socialists”, so calling them “Nazis” is exactly accurate.

The Hungarist Movement was created by Szálasi Ferenc, and reorganized as “Pax Hungarica” in 2008. Hermes has translated several Hungarist videos and a promotional web post. The translator includes this introduction:

The viewer’s discretion is advised on the final video.

It is truly extreme and shocking to the point that Jewish readers may not be prepared to see it. And the most frightening thing is that this video is just four months old! If fellows like this, and not just from the Right, but also from the Left, succeed in coming to power, our actual politicians can start digging their own graves.

How right Lars Hedegaard was. How could things become so dire? How could politicians be so corrupt and castrated so as to let things go so wrong?

Because whatever mess happens, it will be their fault. They were in charge of the governments; they were the ones at the steering-wheel, they were the ones who should have prevented the crisis which, just as in Weimar, led to the Second World War.

But perhaps everything is orchestrated, after all… Masonic lodges, Bilderberg, etc… Only a few chosen ones know the truth about all this, we lower mortals just wonder at how mad the world is becoming…

Many thanks to Vlad Tepes subtitling and uploading these videos:

An appeal to Hungarians to join Pax Hungarica:

The “Pax Hungarica” Movement was created in 2008; that’s why it is to be considered as a rather young movement. Since then, it has been proved that only this movement is able to represent the Hungarist ideas which were brought to life more than 70 years ago. That’s why we do not see the year 2008 as that of the birth of a new movement. Both our supporters and our enemies begin to realize that the Hungarist Movement created by Szálasi Ferenc and reorganized 4 years ago has begun its hard and strenuous fight.

Our movement stands on solid moral, spiritual and material grounds, and we will remain loyal to them. We do not want to play according to the rules of a decaying (political) system which we want to destroy. We do not want gravy jobs and parliamentary seats. There’s only one way ahead of us: the unconditional fight for the victory of Hungarism and Pax Hungarica. Fight under any circumstance and at any price, because we may die, face exclusion of being persecuted because of serving our nation, but we cannot rest even for a second in our fight for Hungarism.

It’s thanks to the solid grounds of our movement that an increasing number of Hungarian patriots feel that they must stand under the banner of Hungarism instead of choosing halfway measures. Nowadays Hungarist cells are forming all over the country and beginning to fight against Darkness (dark forces).

If you feel that you are brave, resolute and perseverant enough, then you also have your place among the warriors of Szálasi Ferenc! Join the Hungarist fight!

So shall the arrow-cross turn the symbol of the new era. We wish to God that the coming generations may see the days when the arrows show the directions towards the four quarters of the globe, towards the national socialist countries of Jesus Christ, the Son of God.

22 thoughts on “The New National Socialists of Hungary”