Tonight seems to be the night for cultural enrichment news from Germany. The story below is about the attack by Islamic radicals on Pro-NRW demonstrators in Bonn the weekend before last. Many thanks to Hermes for translating this article from Die Welt:

He suddenly pulled out the knife and stabbed

Could the knife attack against two police agents in Bonn be prevented? The authorities were astonished by the Salafist Murat K. He was known for his aggressive activities. Looking for clues.

“Which is our way?” The man asks in Arabic with a loudspeaker in his hand. The answer comes from the gathered people: “Jihad, Jihad!”. They swing black flags with their statement of faith written on them. It’s not happening in Pakistan, in the Gaza Strip or in Somalia, but in Bonn, the noon of May 5.

Hundreds of young Muslims, many of them followers of the fundamentalist Salafism, gathered in Bad Godesberg-Bonn, close to the King Fahd Academy. They has a mission: to protect the honor of the prophet Mohammed, even by force if necessary. 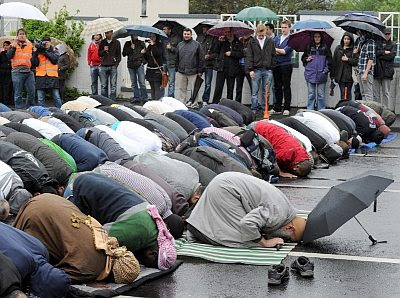 
The right wing party Pro-NRW was present on that rainy day of May in Bonn as part of their very controversial election campaign tour called “Freedom instead of Islam”. The Islamophobes protested with caricatures of Mohammed against the alleged Islamization of Germany.

The Salafists mobilized. Hundreds of them went to the counter-demonstration, among them the prominent ones: The preacher Abu Abdullah, the ex-rapper from Berlin Dennis Cuspert / Deso Dogg, and the German-Egyptian Reda Seyam. 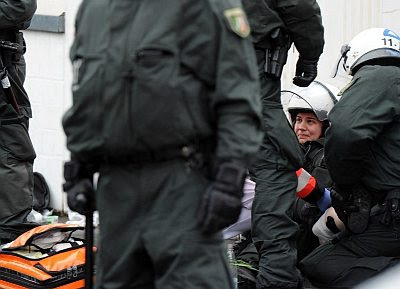 
Water cannons against the raging mob

Among the raging young men standing in the drizzling rain in front of the advancing groups of agents was also a certain Murat K.

The 25-year-old German with Turkish roots came from Hesse in order to demonstrate with his co-religionists. He was hardly noticeable in his long robe and dark praying cap. He shouted just like the others, he lifted the Koran in the air just like many other Salafists on that day. But then the situation escalated. Stones flew and the demonstrating Salafists attacked the police with wood laths.

The police used pepper spray and water cannons in order to halt the raging mob. Several Salafists wede detained, and 29 agents were injured

He stabbed with his knife in a well-directed way

A young man broke through the police barriers and began a frontal attack. He was Murat K.

Then some well-armored agents went for him, but the German-Turk suddenly pulled out a knife and stabbed, clearly aiming where he wanted to. Three agents were injured by the Islamist from Hesse, a 30-year-old policewoman and her 35-years-old colleague received deep wounds in their thighs from K.

The officers lost a great quantity of blood and had to be carried away by an ambulance with severe injuries. The attacker was controlled and detained by the police. Since that time, the public prosecution has been investigating K. for a double murder attempt.

Murat K. made headlines with his attack. It was one of the most serious crimes an Islamist has ever committed in Germany. Actually, acts like this should have been anticipated. The police from Bonn were completely astonished by the aggressiveness and brutality of the raging Salafists.

Murat K. was not observed by the police

The security forces had some dangerous Islamists intensely in their sights in the run-up to the demonstration. Its purpose was to prevent acts of violence. But Murat K. was observed by none, although the Salafist had been known for a long time in his hometown to be aggressive and prone to violence.

K. was born as the third son of an immigrant Turkish family in the town of Eschwege, and prepared himself in Sotra near Kassel in the region of North Hesse for the street clashes in Bonn. The 25-year-old Islamist had been living for a year in a small attic apartment in a timbered house in the town of Sotra.

Before this, he had lived just a few hundred meters away in his parents’ house.

He gave up his studies as a mechanic

At first, K. studied at the integrated, and later at the secondary school in Sotra. Subsequently he attended the technical school in Eschwege until 2005. After his studies he heldd many jobs, for instance as postal a worker and as a packer and worker at the mail order firm Amazon.

After one year, he gave up his industrial mechanic apprenticeship, and since then lived on welfare money. During recent years he attracted attention for his aggressive actions. He engaged in fights in front of discos, which made him known to the police, and also had to serve a custodial sentence.

Sometime during the last few months, a change happened occurred the life of Murat K. He became notably religious, let his beard grow, and began to wear the robe typical of the Salafists following the example of the Prophet.

He soon became a member of a small group of deeply religious Muslims who strolled in long robes and praying caps through the streets of Sontra. Neighbors said that sometimes men with long beards were seen coming in and out of his apartment.

The mayor asked for information from the state security

The mayor, Karl-Heinz Schäfer, showed concern about a possible Islamic cell in Sontra, and he asked for information from the state security about Murat K. and his colleagues in faith. It was fruitless. The security office from Hesse did not answer.

According to infornations coming from Welt Online, Murat K. was known by the regional authorities of Hesse as a member of the Salafist community, although just as a background one.

Now Murat K. is in pre-trial custody in Bonn. Initially the 25 years old Salafist did not want to accept a lawyer. He allegedly declared to the police at the first questioning that the activists of Pro-NRW insulted his prophet, and he had the right as a Muslim to protect his belief and his prophet.

Meanwhile the German-Turk has, according to informations from Welt Online, been assigned a duty solicitor.

Did he expect to be killed in Bonn?

It’s still unclear whether Murat K. had planned the knife-attack against the police agents in Bonn beforehand, or whether he acted spontaneously. According to the magazine Der Spiegel, the Islamist left his apartment in Sontra on April 30 with no intention to return to it.

He seemingly threw away all his belongings, including private letters and documents. This might indicate that Murat K. planned not to return to Sontra anymore.

It’s unclear where he wanted to go. If anything, he accepted that he could be killed in Bonn. “Each of you who meet there the enemy and die, for Allah, you go to paradise, you become a martyr!” This is what a Salafist preacher who was recently deported from Germany promised at a protest rally.

The German Police Union asks meanwhile for more support from the political sphere in the fight against aggressive attacks by radical Islamist Salafists.

One begins to detect in Germany at ever-shorter intervals a new kind of religiously motivated violence, the regional president of the union, Hermann Benker said on Monday. These attacks should be countered by all means.

This would include the reassessment of the (possible) banning of societies and gatherings, and as a last solution, also expulsion.

Even the action was criticised

At the same time, criticism mounts from the rank-and-file of the police in Bonn regarding the action against the rioting Salafists on May 5. The “Kölnische Rundschau” cites from a harsh and emotionally burning brief written by an officer who allegedly took part in the action: The leadership of the action “analysed and evaluated it in a completely wrong way.”

A space for the detainees was set up on Friday afternoon, one day before the demonstration, one for 50 persons. Due to a lack of officers, not every detained Salafist’s identity could be recorded.

“Each Salafist released from the police headquarters was frantically cheered with loud expressions of joy”, the brief continued. The police agents were very poorly equipped

In contrast to the Salafists, the police received no first aid at all. The police of Bonn are, according to the agent who wrote the letter, a “chaotic troupe”, whose leader should “pack his bags and go.”

7 thoughts on “Jihad in Bonn”