Doug Ross at Director Blue has linked this post, adding his own view, “Virtual Book Burning: Amazon Submits to Sharia Law in Europe”:

There is a term — “dhimmitude” — that perfectly describes Amazon’s seeming behavior. I wonder how many other books have been censored for “our own good”?

I liken this kind of conduct to a virtual book burning.

Indeed it is — you can smell the virtual smoke from here.

It appears that Emmet Scott’s book [Mohammed and Charlemagne Revisited] is only available as a Kindle edition on Amazon’s UK site.

At least to me this appears to be a case of covert censorship on the part of the EU. It would not surprise me in the least that the EU leaned on Amazon’s European subsidiaries to minimize distribution of what they consider offensive material.

Eventually even the e-books will vanish.

I agree with S.I., but I’m not certain that this censorship by Amazon is really “covert”. Looks quite obvious from here.

I’ll bet these vanishing acts Amazon is using are done in the name of the barbaric EU “constitutional” rules on forbidden speech for dhimmis. I’ll also wager that the Koran is still available on the European outlets of Amazon, despite the fact it repeatedly and viciously breaks every single rule the EU has about hate speech. This two-tier system consists of one set of rules for Islam and another more restrictive arrangement for the indigenous people.

No problems ordering these books from Europe in the US (I am a registered, repeat buyer). There are atrocious import fees and levies though, sometimes up to 100% of purchase price.

We all know that Google, Microsoft, Facebook, Yahoo, and other major Internet players tend to support the leftist trans-national politically correct agenda. Instances of suppression of conservative or “racist” opinions on sites controlled by these conglomerates are too numerous too mention here. But Amazon seemed to be different. If a book had potential buyers, then Amazon would sell it, regardless of its political slant.

Up until now. According to the report below from Politically Incorrect, the German branch of Amazon has excluded Geert Wilders’ new book from its listings, and the same seems to be true of at least some other European countries.

For would-be purchasers in Europe, there are ways around this, of course. Since the book is still available in the USA (for now), you can ask your American friends to buy it and ship it to you, and then reimburse them. Or maybe you can buy it directly yourself from Amazon USA and have it shipped across the Atlantic…? I don’t know if that’s the case, but if so, click here, or on the book image below, or on the ad on our sidebar.

Many thanks to JLH for translating this article: 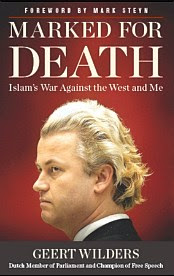 The new book by Geert Wilders, Marked for Death, is apparently neither being advertised nor offered in European Amazon. About two months before its publication date, it was possible to reserve the book on your Amazon wish list. In that space now, there is an empty window — without even a dust jacket. Unavailable. Then if you go to amazon.de, you find out it no longer exists.

Only an audiobook is on offer — no other format. If you call up the book on amazon.com and then substitute .de for .com in the address line, so you can order the same book in English, the message appears: “Sorry, the web address you have given does not exist on our website.” If you try this procedure with any other book in English, the “translation” from amazon.com to amazon.de works effortlessly, as always.

Well, OK, not at German Amazon. Maybe British? So instead of dot.com, we put in dot.co.uk. The result is the message: “We’re sorry, the web address you entered is not a functioning page on our site.” Hmm, no active site for the new Wilders book.

If you try the same procedure with another English language book, you get the respective active pages on amazon.co.uk and amazon.co.fr. Just not with Geert Wilders’ book.

Our impression: Amazon does not intend to offer Geert Wilders’ new book in Europe. Since Amazon is having no problems with it in the USA, and the book there is at the stupendous bestseller rank of 459, the suspicion is that someone in Europe has caused some trouble or made some threats. So, is the idea really to keep the book away from Europe?

35 thoughts on “Is Amazon Boycotting Geert Wilders in Europe?”