Note from Fjordman: I still get questions about donations. Yes, if you use Paypal at Vlad Tepes blog and state that the donation is for me, I do get it. I’ll manage to stay afloat for the time being so I haven’t asked for more donations. However, I would strongly encourage you to donate some money to good blogs that you follow on a regular basis, be that Gates of Vienna, Europe News, the Tundra Tabloids or others. The individuals running such websites are idealists, but even idealists like to eat sometimes.

Fjordman’s latest essay has been posted at FrontPage Mag. Some excerpts are below:

The trial of the mass murderer Anders Behring Breivik in Oslo will feature, in addition to survivors of his terror attacks, a somewhat bizarre list of so-called political expert witnesses. A few of the initial names have already been dropped, as the list keeps being changed. Among the scheduled witnesses, Lars Gule from Norway and Mattias Gardell from Sweden are both alleged academic experts in the field of contemporary Islamophobia.

Lars Gule is, as of 2012, a postdoctoral research fellow at Oslo and Akershus University College of Applied Sciences. His stated research interests are multiculturalism, the Middle East and especially Arab-Islamic political thought. The Socialist Gule is usually referred to as a respected “expert” on multiculturalism in the national media or even the international press. In The Christian Science Monitor he was labeled a neutral academic “terrorism expert” after the Breivik case, although he is in fact an admitted terrorist himself.

In 1977, Gule was arrested in Lebanon for carrying explosives intended for an armed attack in Israel. He has not denied this since, yet his history hasn’t notably impeded his career. He is a prominent national figure on the political Left and was the Secretary General of the Norwegian Humanist Association from 2000 to 2005. Gule was one of seven writers to receive a special scholarship from the Norwegian Non-fiction Writers And Translators Association after the 2011 terror attacks, which he used to write a book focusing on right-wing extremism.

Sadly, the phenomenon of left-wing terrorists who enjoy respectable academic careers afterwards is not limited to Scandinavia. A particularly nasty case in the USA involves the unrepentant Marxist terrorist bomber Bill Ayers. In the late 1960s, Ayers became a leader of the Weather Underground (WU), “an American Red Army.” 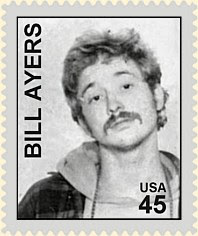 Ayers summed up the organization’s ideology as follows: “Kill all the rich people. Break up their cars and apartments. Bring the revolution home, Kill your parents.” This didn’t prevent him from becoming a well-connected university professor in Chicago a few years later, however. In 2008, journalists such as Stanley Kurtz and Sean Hannity tried to bring more attention to ties between the presidential candidate Barack Hussein Obama and various representatives of extreme left-wing organizations and groups, among them Bill Ayers.

One of the alleged experts cited by the mainstream media about Islamic issues is the Swedish historian and Socialist activist Mattias Gardell, author of a book about so-called “Islamophobia” that was hailed by reviewer Per Jönsson in the liberal paper Dagens Nyheter as a gold mine of wisdom about the supposedly irrational Islamophobia of the medieval Crusades as well as the politician Kent Ekeroth of the Sweden Democrats.

In 2010 Mattias Gardell, the Swedish organizer of the Ship to Gaza initiative, said Israelis had committed “premeditated murder” and were guilty of piracy. Gardell, a professor of religious history at Uppsala University, returned to Sweden accompanied by six others who had been held captive after their ship was boarded by Israeli soldiers. The activists were met at Stockholm’s Arlanda Airport by a crowd of journalists and sympathizers. People presented them with flowers and chanted “long live Palestine” and anti-Israeli slogans. Another passionate supporter of the ships to Gaza is the Swedish bestselling crime author Henning Mankell.

When asked directly about this, Mattias Gardell made no attempt to hide the fact that the pro-Palestinian ship which he organized headed for the Gaza strip contained members not just of Fatah and the PFLP, but of the Muslim Brotherhood in Egypt as well as Hamas. He sees nothing wrong with this, and claims that Hamas, responsible for hundreds of individual terror attacks, is not a terror organization but a social movement.

Read the rest at at FrontPage Mag.

3 thoughts on “Fjordman: Islamophobia ‘Experts’ to be Called in Breivik Case”