The following report about anti-Christian vandalism and “street theater” was sent to us by a correspondent in Slovenia. 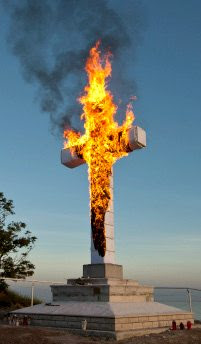 In the MSM we were able to read the information that on Thursday, 10th May 2012, the cross on the hill overlooking Strunjan was burned for the second time. Dean Verzel and the photographer Goran Bertok carried out the same act ten years ago, but were acquitted in court.

This time Dean Verzel teamed up with Andrej Medved, a philosopher and poet, who recited his poetry at the burning cross. “The cross does not symbolize spontaneity and freedom but hierarchy, subordination, dullness. Therefore it is a sign that has to fall. And with it every god, which is like petrifaction of fire” says Medved’s song. It continues: “The burning of the cross and the fire are active anarchy, like realized active poetry. And the one who awakens dangerous anarchy is always its first victim.”

Dean Verzel stated: “This was not an attack on the Christian religion. This was only an apparition. Every religion could understand my actions.”

The time of this cross burning hints it was deliberately planned action to raise religious intolerance and degradation of religious symbols. This year Strunjan will celebrate the 500th anniversary of Marian apparitions, and the church dedicated to them. In advance of this anniversary, religious people restored the cross last year. It was raised by seamen and fishermen in 1600 to safeguard them at sea.

Is it necessary to oppress Christian symbols?

The burning of the cross as the votive image can be understood as a direct act of Christophobia, which sows religious intolerance. It is interesting that the Slovene legal system allows such acts, as well as discrimination, and thus encourages hatred against Christians. The reason is obvious: symbolic oppression of Christianity with the aim that the Christians in Slovenia would continue to be socially oppressed.

One can ask the question why such artists never burn a flag in front of Parliament or one of the many communist memorials or even Islamic symbols. The reason is obvious — the courts would immediately sanction such an action.

This was not the case with the first burning of the cross ten years ago, nor with the “artistic” painting of Mary with a rat in her lap, the desecration of Holy Mary of Ptuj, the hate speech of the poet Svetlana Makarovič in January, etc., when the district attorney and courts did not want to find reasons for prosecution. With that they only increase the incidence of hate speech toward Christians. It is obvious that so-called “artists” are only another name for ideological activists against Christians whose aim, is to generate ideological excess (e.g. symbolic second-class citizenship of Christians) and to support unquestioned superiority of some of the militant secularists who pay no attention to human rights and basic principles of democracy.

For more on this story, see these links (in Slovenian):

5 thoughts on “Cross-Burning in Slovenia”