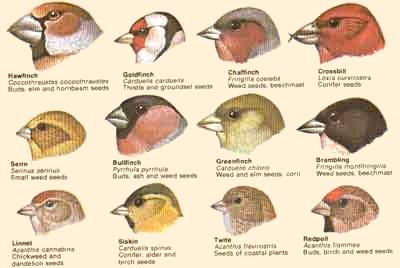 
We’re now into the second day of our quarterly effort to raise operating funds. As mentioned yesterday, the topic for this bleg is Diversity. Dymphna kicked it off last night by looking at demographic diversity, both among our readers and among our donors.

What other diversities are worth looking at?

Well… There is a diversity of birds outside my window here in the upper room of the North Tower at Schloss Bodissey.

I don’t mean right now, of course. It’s the middle of the night, and the weather is so stormy that not even the whippoorwills are willing to brave the sturm und drang out there. But during the middle of the day I can sit here and watch the phoebes flit back and forth outside the screen as they tend to their nest at the top of the drainpipe. Every now and then they fuss loudly at the squirrels that run up and down the nearby oak tree.

Besides the phoebes, we have at least two pairs of crows, innumerable sparrows, lots of wrens, a few cardinals, some bluebirds, a nuthatch, the odd pileated woodpecker or red-headed woodpecker, very rarely a goldfinch, a half a dozen rowdy chickadees, a mockingbird, and an occasional brown thrasher at the edge of the woods. During the winter we have juncos, with robins filling in for them during the summer. Once a year, when the fruit ripens, our juneberry tree is full of feasting cedar waxwings — the only time we ever see those reclusive oddballs.

When the cat is out on the lawn, the birds tend to retreat. But the rest of the time our yard is a chittering, squawking aviary. This is the sort of diversity that appeals to me.

It’s not the kind of “diversity” we’re supposed to celebrate, however, even though the “natural” aspect of the idyllic view from my window would probably earn it the seal of ideological approval from the PC PTB. No, a diversity of finches is not enough.

How about a diversity of national currencies? Would that help?

Not really — and especially not in Europe. Some diversities diverge too much from ideological orthodoxy.

No, we all know what “diversity” really means: it means an array of differently-colored faces, a lot of competent-looking women mixed evenly with sensitive, caring men, and some cheerful folks in wheelchairs. It requires the inclusion of people with deviant sexual proclivities — nothing blatant or anything, just a few visual cues to tell the TV audience he’s one of them.

Maybe a guy in overalls and a woman in a hostess’ uniform as a nod to those hard-workin’ yokels out there in flyover country.

But no diversity of opinion. All those celebratory inclusive rainbow-dwellers think exactly correct thoughts. They know what to recycle, and when. They recognize that the nation-state is a throwback to our violent past, and must be eliminated. They understand the need to build sustainable birdbaths.

And they know how to treat those reprehensible wretches whose thinking deviates from orthodoxy. Time to whip out the prescription pad and order up a diverse selection of psychotropic medications!

As regular readers know, despite the fact we’re monocultural whitebread folks, we tolerate a diverse range of opinion here at Gates of Vienna. We stick to our mission statement, but there is a lot of room outside of that for argument to range freely.

We’ve featured excerpts from various socialist writers who also happen to resist Islamization. We once published a guest post submitted by an anarchist. We include Christians, Jews, Buddhists, Hindus, and atheists (lots of those pesky atheists). Libertarians versus neocons, birthers versus truthers, lumpers versus splitters — let ’em duke it out!

We’re a tolerant bunch, really. Heck, I even tolerate the fact that Dymphna was raised a Catholic.

So I’m ready to celebrate a lot of geographical diversity in Tuesday’s donors. These are the places represented by donations that came in yesterday, the 559th anniversary of the fall of Constantinople:

Many thanks to all of you. This blog is a cooperative effort, and your generous (and diverse) support is deeply appreciated.