The Protocols of the Elders of Zion seems to be enjoying something of a comeback in Norway. Our Norwegian correspondent The Observer has translated an article about the affair from NRK.no (Update: I forgot to mention that this is a translation of only part of the original article):

This is pretty horrific stuff from Galtung 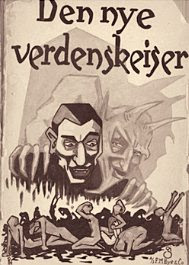 Peace Professor Johan Galtung has received sharp criticism from experts on anti-Semitism and conspiracy theory as a result of his latest article. “A sad exit from the Norwegian academy,” says Terje Emberland, director of the Norwegian Holocaust Centre.

In a recent article published on the website Humanist, the internationally renowned peace researcher Johan Galtung (81) writes that the directors of the three largest media conglomerates in the U.S. are Jews, and that large numbers of American newspapers and movie are “pro-Israel”.

Galtung also writes that he recommends that everyone should read the controversial publication “Protocols of the Elders of Zion”, which throughout recent history has been highlighted as a secret plan of Jewish world domination.

“That he suggests that the Protocols may contain an element of truth about the Jews’ position in the world is something I react strongly to. This book has been revealed as a fabrication time and time again. It is shocking to hear anyone recommend this,” religious historian and senior researcher at the Holocaust Centre Terje Emberland says.

“Uses background information from a Nazi”

The editor of Humanist, Didrik Søderlind, explains in an editorial clarification why Humanist decided to publish the post, and that Galtung’s source for these claims he makes in his article is an abbreviated version of another online article, called “Who Rules America”.

Emberland also find it shocking that Galtung backs their claims about Jewish control of the media and that he refers to an article published by William Pierce’s website, National Vanguard.

Embelerland describes Pierce as “one of the most important Nazi ideologues in the postwar period.”

“The reference to an article from National Vanguard, which was founded by Pierce, is shocking. Pierce has been a central figure in formulating the Nazis’ battle strategy after the war, the so-called ‘one-man terrorism.’ This is a man whom both Breivik and the Oklahoma bomber referred to,” Emberland says.

Emberland also believes that Galtung shows a very lenient regards for the facts.

11 thoughts on “The Protocols of the Norwegian Academy”